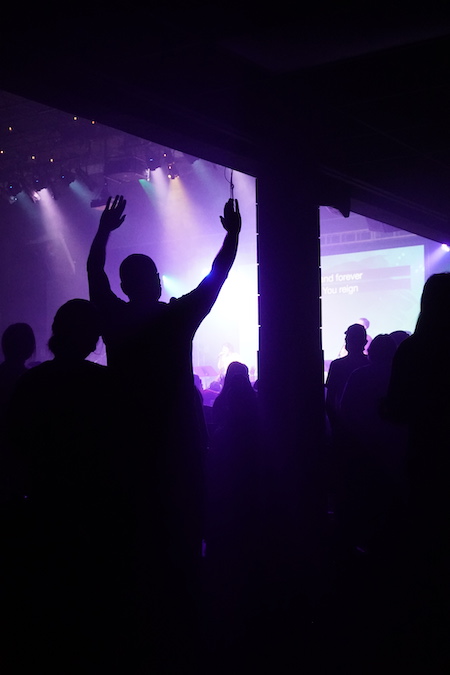 When Allena Fugatt learned her youth group couldn’t make the annual trek to Zona Camp in 2020, it was one of many disappointments caused by COVID-19.

“COVID was already ruining so much stuff, and Zona was one of the things I always looked forward to,” said Allena, who just graduated from high school. “If you don’t have Zona, it’s not a summer at all.”

Thankfully, summer 2021 is in full swing. Zona Camp is back.

From June 1-5, about 360 students and leaders gathered in Glorieta, New Mexico, for Zona Camp 2021 — just in time for Allena to celebrate her senior year at the camp that has influenced her walk with Jesus since middle school.

“I feel like once I went into my youth group and Zona, something clicked and I started understanding more and more about Jesus,” said Allena, who goes to Happy Valley Baptist Church in Glendale.

That’s the power of Zona — a week of worship and Bible study, combined with community, inside jokes and adventure.

“We weren’t made to sit here on screens and be alone,” said Joel Mucklow, a graduated senior from First Southern Baptist Church at Sahuaro Ranch in Glendale. “So being able to see people face to face, to eat together, to sleep in the same room and talk all night when you’re supposed to be sleeping, to do fun rec activities together and learn about God together — community is so huge.” 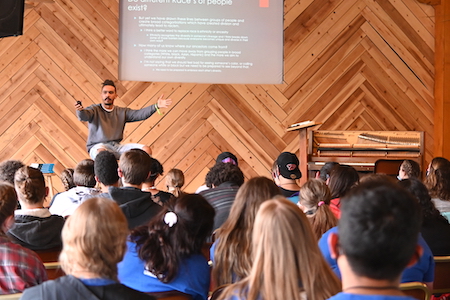 DeVaughn Cunningham leads a breakout called, “The Gospel: A Remedy to Racism,” during Zona University time at camp.

Zona’s relocation to Glorieta meant students had more options during free time, including zip-lining, rock climbing and swimming in a lake decked out with giant slides and obstacle courses.

The location, plus a hunger for normalcy, attracted new churches, said Aaron Petre, who co-directed this Zona with Joshua Tompkins. Last year, instead of the traditional camp experience, churches had the option to host their own DIY camps with “Zona in a Box” resource kits.

At Glorieta this year, 17 students made first-time decisions to follow Christ, 13 recommitted their lives to Him, eight responded to a call to ministry and more than 40 received prayer.

“There’s just something about Zona that brings decisions out of kids,” said Petre, pastor of Enchanted Hills Baptist Church in Tucson. “They know it’s a safe place. And, you know, they worship here more than they will at home. … There’s a freedom to be themselves.”

That life change is what compelled the Zona team onward, even as they faced significant obstacles while planning camp, including late changes to the location, speaker, band and camp director, plus pandemic complications such as mask requirements.

Despite it all, Zona Camp was “Restored” — the theme for camp this year.

Allena’s sister Mackenzie Fugatt got to see restoration firsthand as a member of the Zona Crew, a group of 20 college students who served at Zona. During a post-worship response time, Mackenzie led someone to Christ for the first time.

“That moment was probably the highest moment in my life,” Mackenzie said. “That moment when it was just me and that 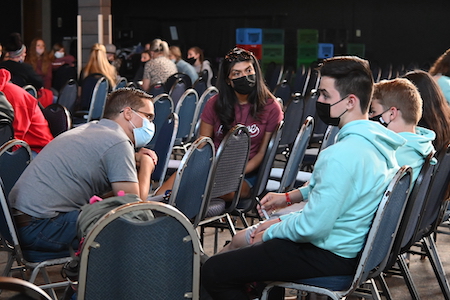 Raquel Williams and David Trenbeath, from Arizona Baptist Children’s Services, listen to students during a breakout session on sexual purity.

girl and her just being so full of courage to tell me, a stranger, all of her problems, and me being able to share what God has been doing in my life, it’s so hard to explain. You could feel the love, and it made me so happy to see someone finally see God like that.”

Like her sister, Mackenzie attended Zona as a student from middle school through her senior year. And this year, their younger sister attended Zona for the first time as a seventh-grader, Allena said. The legacy of Zona continues — even after a year of obstacles.

“We came up with the theme for restoration because we were thinking about where our teenagers were at in regard to COVID,” Tompkins said. “So we started thinking about things that were broken because of what COVID had done. … So it’s not just that God was restoring Zona Camp but that God can restore so much more than that in our lives.”