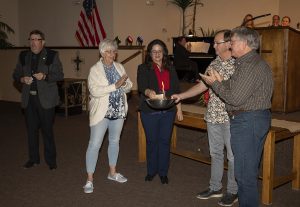 First Southern Baptist Church of Wellton celebrated the final payment of their mortgage — eight years early — on Jan. 8. They conducted a note-burning ceremony, held a special service chronicling the “Joy in the Journey” from 2003 to 2022 and enjoyed a celebration meal prepared and served by Arizona Southern Baptist Disaster Relief volunteers.

The journey to a new building at a new location began with planning, fundraising and prayer teams walking the property.

“We asked Glen to sell us 10 acres of the property,” said Charles Wesner, First Southern’s pastor of 22 years. “Curtis said no but told us to come back later and ask him again. The second time we asked, he said he would not sell 10 acres but he would give us 5 acres if we ‘promised not to put a chicken coup on it.’ We made the deal with a handshake.”

The church sold their building and rented it back until they could occupy the new one. Members, the community and others contributed to the capital fundraising effort. Kids invested with jars of pennies. Everyone stepped up. Pledges were made and met. The $1,200,000 cost of construction supplies and materials was covered. 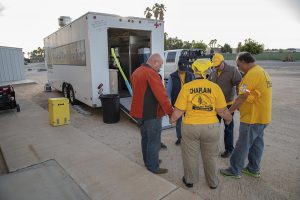 Over the next five years, volunteers from “Baptist Builders” groups around the country constructed the 30,000-square-foot building. Women wrote scriptures on the door jambs and the walls. The verses remain under the paint throughout the building. It was “the finest built church in Yuma County” according to the building inspectors, Wesner said.

“We did not cut outreach or giving,” he said. “We continued to invest in the Cooperative Program and the community. Nothing else suffered during our building phase. We trusted God would provide for us and we would provide the ministry to the community.”

Funds came in God’s perfect timing. When supplies were needed, the funds appeared shortly before or right after.

The building contains a sanctuary with a balcony, classrooms, and a large room for youth activities, events and community programs. All the rooms are set up for technology.

It is the largest building in town, designed and built to serve 5% of the community — a God-sized project to minister to 1,000 souls. 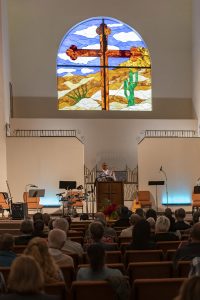 Currently, from November through April attendance is 180 to 200 people. In summer, it is usually 100.

The church has a 15-spot RV park on the property and two additional buildings are planned.

“There is joy in the journey,” Wesner said. “Even when we were moving to the new campus there was such a sweet spirit. To God be the Glory!”

Arizona Southern Baptists have a rich history of missions. From our earliest of days, men and women have answered the Lord’s call to go and serve. This legacy of obedience…