Vision of ‘Renew and Restore’ fulfilled at Arise AZ Conference 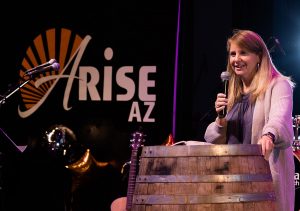 That they gathered inside was a big deal.

Last year, COVID-19 forced the inaugural Arise conference outside onto the Sedona Red Rock High School football field. And while necessary, it wasn’t quite what Shannon Jennings, the chair of the Arise AZ planning team, had in mind when she first began imagining the conference in 2019.

“The football field was the Lord’s provision to continue with Arise, but it was not the initial vision that God gave for it,” Jennings said. “The biggest difference between 2020 and 2021 was that 2021 was the vision coming into focus.” 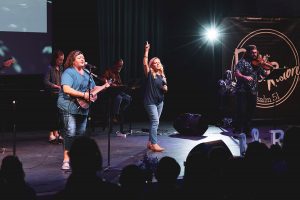 That vision included air conditioning, a full band and media team, video testimonies, a livestream to Facebook and an extensive selection of breakout sessions. It also included life change — at least four women made decisions to follow Jesus for the first time, and more than 150 made a rededication or had a renewal experience, Jennings said.

The theme for Arise this year was Renew and Restore, based on Psalm 51.

Sponsored by the Arizona Southern Baptist Convention and the North American Mission Board, Arise 2021 happened with the help of volunteers from Sedona’s Aletheia Church, a statewide Arise planning team and a mission team from a church in Arkansas.

“The main hope was that after having a year-and-a-half of ups and downs … and having to move things in our lives … that we would be able to come in and worship together and it would renew and restore us and begin that revival process in our own lives that would hopefully have the overflow into our cities and state and country,” Jennings said. 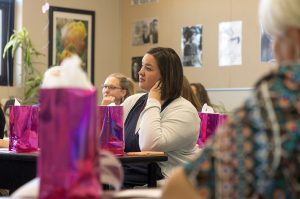 Erica Wiggenhorn, Jill Rhodes and Sara Beekman — all Arizona women — led the main sessions, along with Catherine Renfro, an evangelism strategist at the North American Mission Board. Women from across the state led about 20 distinct breakout sessions on topics ranging from raising godly children to pursuing rest.

Maria Saenz-Dominguez goes to 22nd Street Baptist Church in Tucson and attended Arise with a group of friends she invited. The conference was bittersweet — she was in attendance at the invitation of a friend and mentor who recently passed away.

“It was a time of renewing my spirit with Him and my passion where I left off,” Saenz-Dominguez said. “I recently lost my job, my brother and my mentor, so it’s been a little bit rocky.” 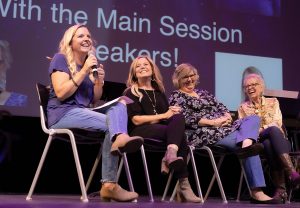 “We’re here because she had us come, and now she’s not here, but she is,” Saenz-Dominguez said. “I felt like God might have taken her away, but He never took her out of my heart, and I’m just going to turn around and do what she did for me for other women. And that has renewed my passion and cleared the fog that I was in.”

Her weekend at Arise renewed her determination to check out seminaries and follow where she believes God is leading her.

This is Jennings’ vision fulfilled.

“It was an amazing time of worship on Friday and Saturday of women just coming together and being able to get away from all of the baggage that they have had and just being to worship together,” Jennings said.

You can catch the main session speakers from this year’s conference on the Arise AZ Women’s Conference Facebook page, https://www.facebook.com/ariseazwomensconference. For more information or to purchase tickets for the 2022 event, visit https://www.ariseaz.com/.