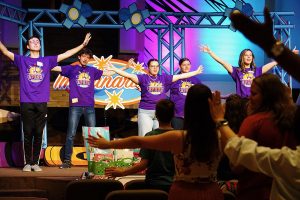 The outreach of Vacation Bible School truly is exponential. Children’s summer Bible programs began in the 1870s and have evolved into today’s VBS. It starts with one church investing in children who, in turn, share with their friends and family and ultimately touches lives across the nation and around the globe. Arizona’s VBS program is no exception.

“Core classes for all grades and rotations were offered, as well as teaching how to share the Gospel with children, classroom management, learning styles, and ministering to Generation Alpha — the current generation of children ages 3 to 13,” he said. 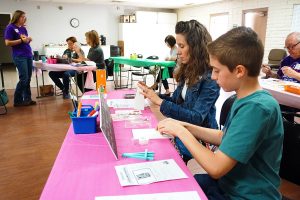 This year’s Lifeway VBS program, Spark Studios, is designed to teach kids that God’s creativity didn’t stop in Genesis. They will learn “the Master Artist is working to redeem, reclaim, and transform us — His creation — to the design He planned for us.”

According to Jackie Fry, children’s minister at Royal Palms, “This year’s conference was jam-packed with lots of ideas from different people, so you got to see the actual curriculum in action and kind of experience it.”

She led the directors’ class, where ideas, suggestions and help were shared for the smallest to the largest churches. “Just sharing ideas and reconnecting with other people — as well as lots of encouragement — was great,” she said.

Fry talked about why her church invests time and resources in VBS.

“We hold VBS in order to have concentrated discipleship with our children to be able to encourage them,” she said. “We give them an opportunity to invite their friends and then evangelize the neighborhood.”

Multiple groups are affected, she said. 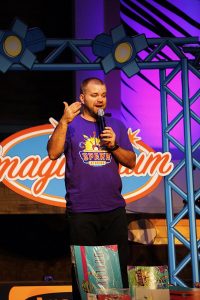 “VBS benefits our community and our children, but it also benefits our church family, because it gives them the opportunity to step out of their norm in order to really touch the lives of children and their families,” Fry added.

“VBS Bible school is the biggest evangelistic thing we do at our campus,” said Deb Jones, one of the children’s ministry directors and the VBS director at West Valley International Church in Glendale. “We budget for it every year. We’re a little church — small but mighty. I think VBS is like a little slice of heaven.”

Even as an experienced VBS leader, Jones said she finds the VBS workshops and conferences provided by the Arizona Southern Baptist Mission Network to be helpful.

“I always discover new gimmicks and great new practices on how to make things better at these conferences,” she said.

Their church has extended VBS beyond just the five-day event. Recognizing that most of the kids did not return after VBS, they began offering an extended VBS by repeating the individual lessons over the following five Wednesdays.

“We have kids coming who have been around for over a decade, and they continue to come back,” Jones said. “They are a part of our regular programs on Wednesday night and Sunday morning, and they’ve come to know the Lord.” 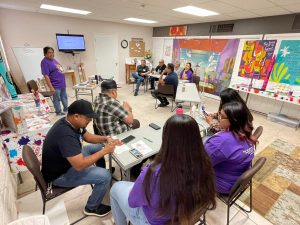 In addition to the State VBS Conference in English, VBS training was held in Spanish in Phoenix March 26 and in Yuma April 9 with a total of 150 attendees. Josue Castro, Hispanic Ministries facilitator,

“The purpose of the training was to train and motivate Hispanic churches to use VBS as the effective evangelism tool that it has been throughout the years,” said Josue Castro, Arizona Southern Baptist Mission Network Hispanic Ministries facilitator.