Sifting through ashes to bring comfort 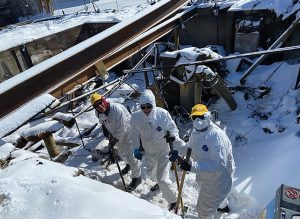 Over the last few months, a dozen volunteers from Arizona have spent days in Boulder County, Colorado, sifting through ash — the remnants of hundreds of homes destroyed by a wildfire last year.

On Dec. 30, 2021, the Marshall Fire swept through communities in Boulder County. The Denver Post reported that two people were killed and more than 1,000 homes were destroyed, making it the most destructive wildfire in the state’s history.

For weeks, Southern Baptist Disaster Relief teams from around the country braved winter weather to help homeowners recover the remains of their possessions.

Patty Kirchner, director for Arizona Southern Baptist Disaster Relief, arrived in Colorado on Feb. 22. That team of five was the third from Arizona to lend aid.

“It was heartbreaking to see people had who lost everything,” Kirchner said.

“It usually doesn’t happen in most fires, finding things,” Belz said. “This one was different because of the wind and the way things fell. Probably 80% of what people were looking for was found in this fire. It’s very unusual to find passports and wallets and so many diamond rings.”

For Kirchner and her team, discovery was not just unusual — it was also miraculous.

Homeowner Sandy Quiller said she was immediately interested when she heard about volunteers offering free sifting services. She lost everything in the fire, including possessions of her late husband’s and items belonging to her three adult sons.

She asked Disaster Relief volunteers to look for a ring that belonged to her late husband Jerry Quiller, a cross country and track and field coach who coached the 2000 U.S. Olympic team in Sydney, she said. The hoped-for ring, which was from that Olympics, had been sized specially for her at her husband’s request.

“It was just such a unique thing,” Quiller said. “I thought it was like a needle in a haystack, and they would not be able to find it. There are so many things that I have lost. My husband passed away 10 years ago … so [the ring] was one of the things that I wanted to have.”

Living out of state with family after the fire, Quiller stayed in contact with Kirchner and her team over the phone. Kirchner said a neighbor with a similar floor plan showed them around what remained of the townhouse.

“We had to dig out a foot-and-a-half of snow and ice before we could get to the ash,” Kirchner said, adding that the presence of debris also complicated the search.

On the first day, they discovered a closet in the basement with children’s books and toys, sports cards and track and field medals stacked in bins, but no ring. On day two, the team moved slightly, uncovering a charred box with what looked like cufflinks. Soon after, they found a woman’s ring.

Realizing the enormity of what they were trying to do — truly a “needle-in-a-haystack” situation — Kirchner said she knelt down and prayed.

“That wasn’t the first time we prayed, but I decided it doesn’t hurt to pray again,” she said. “A few minutes later, one of my team members said, ‘This is a ring, I think.’”

Kirchner said she took a picture and texted it to Quiller. In less than a minute, the phone rang. God answered their prayers. They had found the Olympic ring.

“We started jumping up and down and screaming and yelling,” she said. “You would have thought we won the Olympics.”

For Quiller, the discovery was overwhelming and unexpected.

“It was shocking, because to me it was like a miracle,” she said. “I thought there was no way that could ever be found. That was so amazing.”

The cufflinks, it turns out, were also from the Olympics — and worn by Quiller’s oldest son at his wedding.

That extra discovery drew Kirchner’s mind to Ephesians 3:20-21 — that God is able to do more than we ask or imagine. And ultimately, that’s the desire of Disaster Relief volunteers: To communicate God’s love in a tangible way during a crisis.

“I think the people who do the sifting and offer that as a free service, it’s overwhelming to me, because it’s a tremendous service to do for people,” Quiller said.

For her, working with Disaster Relief volunteers to sift through her possessions when she could not brought some closure, she added.

“None of us want to have to do what we do, because that means somebody has lost something that is very major,” Belz said. “But the Lord has given us a heart to help people.”