Sent out but not alone 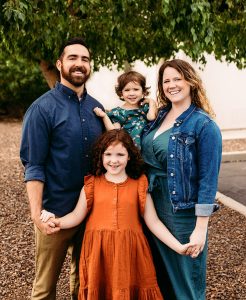 Caleb and Tricianne Spacht, pictured with daughters Reagan, 6, and Camryn, 2, have been appointed as missionaries with the International Mission Board. As members of Happy Valley Baptist Church in Glendale, they won’t go alone.

For Caleb and Tricianne Spacht, the process of preparing to serve with the International Mission Board as church planting hub leaders in France didn’t happen overnight nor in isolation. When Arizona Southern Baptists are sent out as missionaries, they don’t go alone.

Drawn by the Spirit

When Caleb and Tricianne first sensed the Holy Spirit was drawing them to overseas service, it was not in a specific moment, but rather a series of moments that were cultivated by their experiences with Arizona Southern Baptists.

Caleb has been a part of Arizona Southern Baptist life for 16 years — since he started as a college intern at Happy Valley Baptist Church in Glendale. Now, Caleb is Happy Valley’s family pastor.
Within the last four years, both Caleb and Tricianne began to feel called to something else but couldn’t tell what. They both thought missions would be in their future, but maybe after their kids were grown.

“As Caleb and I began to talk about missions, we found we couldn’t stop talking about it,” Tricianne said. “We decided why not now. We will step out in faith, and let God close the door.”
So far, God hasn’t closed that door for the Spachts. 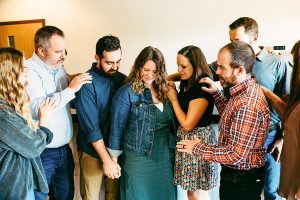 Supported by the church

Once they began contact with IMB, the Spachts included their pastor, Chris Boggus, and his wife, Becky. Part of the IMB process includes obtaining an assessment by the church to confirm a missionary candidate’s calling, but this wasn’t the sole reason why the Spachts consulted their pastor. They knew their pastor and church had a heart for missions.

“[Happy Valley] has a mission-sending culture,” Caleb said. “Over the past few years, [our church] has supported at least two members as they followed their calling to serve overseas with the IMB.”

In addition to individuals responding to the call to go, financial support for missions has steadily increased, including Happy Valley’s largest-ever Lottie Moon Christmas Offering in 2021.

Their church also supported the Spachts in practical ways. One step in the missionary candidate process is to attend a conference in Virginia where the candidate can learn more about the job needs around the world and where the candidate’s gifting and calling would be the best fit. Childcare is not provided at this conference.

“Our church family stepped up and cared for our children while we were away,” Tricianne said. “We were blessed and at peace to know people we knew and loved were providing loving care for our kids.” 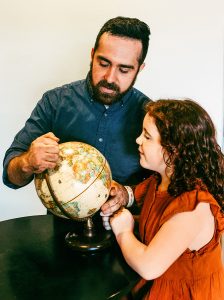 Caleb Spacht shows daughter Reagan where they will be moving.

Sent out by the network

“We hope the relationships we have developed with people over the years as we have served with Arizona Southern Baptists through local churches, associations and Zona Camps will become short-term teams who come with us to help in planting churches,” Caleb said.