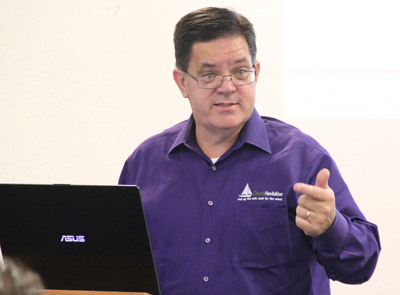 “Pastoring a small church is not a penalty for doing something wrong,” said Karl Vaters, one of the two keynote speakers. “It’s a specialty, and it’s worth doing well.”

Small churches have value and impact for the kingdom of God, Vaters said, summing up the message of Revitalize West, which was sponsored by the church revitalization team of the Arizona Southern Baptist Convention.

Why was the focus on small churches? Because the average attendance of a Southern Baptist Church in Arizona is 77, and it is the belief of the revitalization team and the speakers at the conference that churches attended by less than 250 people are “normative-sized” churches. According to Vaters, small churches are more widely and more evenly distributed around the world than Coca-Cola.

The conference itself consisted of two general sessions and three breakout sessions.

Terry Rials shared some encouraging helps in both his breakout session “My Church is Imploding. Now What?” and his general session message on Saturday morning. Through his use of humor and the practical application of Scripture and experience, Rials told how to help a church that is either plateaued or in decline. 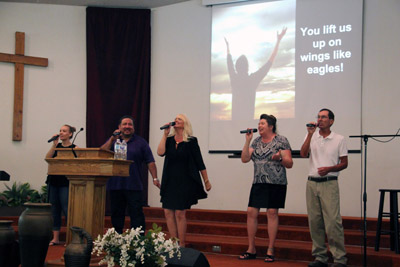 He encouraged pastors to get their people together to pray often and to involve the congregation in dreaming again. He also told pastors that if there was ever a time the sheep needed a shepherd, it is during a time of decline and difficulty.

The term “healthy church” is used a lot in conversations about churches today. Karl Vaters said the three essential elements of a healthy, effective church are: 1) the Great Commandment, 2) the Great Commission and 3) pastors who equip the saints to serve effectively.

“Our state revitalization emphasis recognizes small churches are not a problem to fix,” said Keith Durham, AZSBC church revitalization specialist, reflecting on Revitalize West. “Small-church pastors need encouragement to dream again to fulfill their God-sized mission, do whatever they can to advance the ball forward and know God wants to use them to make great contributions to His kingdom. Revitalize West placed tools in the hands of pastors and lay leaders to do just that.”