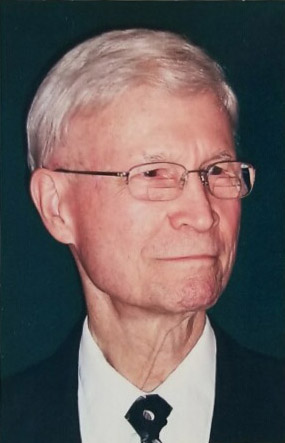 “For almost a century, he set a great example for all of us to follow, whether pastors or lay people,” Johnson continued. “His legacy will live long in the lives of those he served.”

After serving as pastor or staff member with four churches in the South, Pyfrom felt God’s call to go west. In 1960, he and his family moved to Arizona on faith, not knowing anyone and without a position with a church.

He taught sixth grade and was principal of North Phoenix Baptist Church’s school for the 1960-61 school year. During that time, he was also mission pastor of First Southern Baptist Church, Mayer, and then of 44th Street Baptist Church, Phoenix.

During his ministry in Arizona, he served more than 90 churches as interim pastor or supply preacher.

As a member of North Phoenix Baptist Church, he taught an in-home Bible study for a number of years until around the age of 90. He also led an ongoing Bible study at a retirement center.

He earned bachelor’s and master’s degrees from Bob Jones College (now University) and earned a master of divinity degree from New Orleans Baptist Theological Seminary. He also did graduate work in counseling at Arizona State University.

Pyfrom is survived by Joan, his wife of almost 13 years; four children: Gayle Pyfrom (Steve), Valerie Pyfrom, Victoria Pyfrom and Randy Pyfrom; two grandchildren and one great-grandchild. His first wife, Sara Gayle, preceded him in death. They were married 61 years.

A memorial service will be held at First Southern Baptist Church at Sahuaro Ranch, Glendale, on June 19 at 2 p.m.