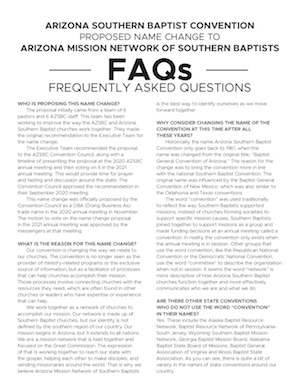 Click on the image to download/save a pdf copy of this document.

Who is proposing this name change?

The proposal initially came from a team of 6 pastors and 6 AZSBC staff. This team has been working to improve the way the AZSBC and Arizona Southern Baptist churches work together. They made the original recommendation to the Executive Team for the name change.

The Executive Team recommended the proposal to the AZSBC Convention Council, along with a timeline of presenting the proposal at the 2020 AZSBC annual meeting and then voting on it in the 2021 annual meeting. This would provide time for prayer and fasting and discussion around the state. The Convention Council approved the recommendation in their September 2020 meeting.

What is the reason for this name change?

Our convention is changing the way we relate to our churches. The convention is no longer seen as the provider of ministry-related programs or the exclusive source of information, but as a facilitator of processes that can help churches accomplish their mission. Those processes involve connecting churches with the resources they need, which are often found in other churches or leaders who have expertise or experience that can help.

We work together as a network of churches to accomplish our mission. Our network is made up of Southern Baptist churches, but our identity is not defined by the southern region of our country. Our mission begins in Arizona, but it extends to all nations. We are a mission network that is held together and focused on the Great Commission. The expression of that is working together to reach our state with the gospel, helping each other to make disciples, and sending missionaries around the world. That is why we believe Arizona Mission Network of Southern Baptists is the best way to identify ourselves as we move forward together.

Why consider changing the name of the convention at this time after all these years?

The word “convention” was used traditionally to reflect the way Southern Baptists supported missions. Instead of churches forming societies to support specific mission causes, Southern Baptists joined together to support missions as a group and made funding decisions at an annual meeting called a convention. In reality, the convention only exists when the annual meeting is in session. Other groups that use the word convention, like the Republican National Convention or the Democratic National Convention, use the word “committee” to describe the organization when not in session. It seems the word “network” is more descriptive of how Arizona Southern Baptist churches function together and more effectively communicates who we are and what we do.

Are there other state conventions who do not use the word “convention” in their names?

Yes. These include the Alaska Baptist Resource Network, Baptist Resource Network of Pennsylvania-South Jersey, Wyoming Southern Baptist Mission Network, Georgia Baptist Mission Board, Alabama Baptist State Board of Missions, Baptist General Association of Virginia and Illinois Baptist State Association. As you can see, there is quite a bit of variety in the names of state conventions around our country.

Does this name change reflect a change in doctrine or theological perspective?

No. We are guided by the Baptist Faith and Message 2000 as our statement of faith. We continue to stand strong on the inerrancy of Scripture and the authority of the Bible as the standard of truth by which all other perspectives must be evaluated and tried.

Does this name change mean that our churches will no longer be tied together as strongly?

There is no reason why the term “network” should be understood as less binding than the word “convention.” Southern Baptist churches are autonomous and independent. They voluntarily enter into a covenant relationship with other churches for the purpose of accomplishing a mutually agreed upon vision while adopting common doctrinal standards.

We believe we can accomplish more working together than alone. We are not held together by ecclesiastical authority but by intentional cooperation. We work together to send missionaries, plant churches, prepare pastors and missionaries, and engage in compassion ministries. We hold each other accountable to the statement of faith we have adopted. The result is a recognition that we are better together than we are by ourselves. That is the value that brings us together regardless of whether we are called a convention or a network.

Does this name change mean we will be changing the way we support missions or the mission work we currently support?

No. The Cooperative Program is our chosen method for supporting missions both in Arizona and across the country and around the world. We are continuing to increase the amount we give toward national and international missions through Southern Baptist causes as a recognition of the lostness of the world and the need to get the gospel to every tribe and nation. At the same time, we realize that the population of Arizona is continuing to grow and there are millions in our own state who are not a part of a Bible-believing, gospel-preaching church. For that reason, missions will always be at the heart of everything we do.

Does this name change alter the way our convention is structured or operates?

No. We will still have the same processes and structures as outlined by our Constitution and Bylaws. This name change will not change the legal name that we are identified by but will simply be a DBA (Doing Business As) trade name registered with the Arizona Corporation Commission. We do not want to risk any historic or legal standing we have going back to our charter in 1928. We will continue to operate in compliance with the requirements of the state and federal government to provide an umbrella for our churches to operate as charitable entities for tax purposes.

How does this name change relate to the national convention’s considering the name “Great Commission Baptists”?

These two name change processes are not related and were developed differently. The alternative name “Great Commission Baptists” was proposed in the 2012 annual meeting of the Southern Baptist Convention as a result of a task force appointed by then President Bryant Wright and led by Jimmy Draper, the former President of LifeWay. The name was approved by the messengers for churches to use in place of Southern Baptist if they so desired. While few churches adopted the new name, there has been a recent renewal of interest in using that term for the national Southern Baptist Convention as a whole.

The proposal to change the name of the Arizona Southern Baptist Convention to the Arizona Mission Network of Southern Baptists was made by a team of pastors and convention staff. This team has been working for the past year to study how the AZSBC can better connect with churches and engage them in processes that will help them take their unique next step toward accomplishing their mission. We do not want the convention to merely be a hub for churches to relate to, but a network of churches that are inter-connected with each other for the purpose of accomplishing a common mission. Arizona Mission Network is a better description of that approach and is more appropriate to our context.