Path to fruitful ministry is through obedience 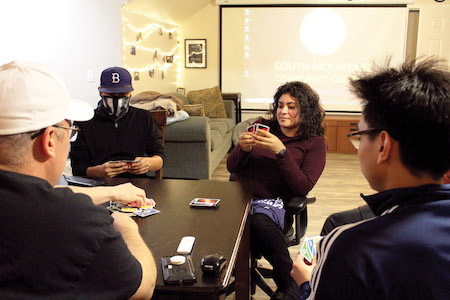 As believers, it is not a matter of if we are called to serve the kingdom of God but rather how. This understanding of calling is one Christian Challenge missionaries Scott and Amy Winter have always embodied.

Though God’s path of obedience is not easy, it is always fruitful. Convicted to serve as full-time missionaries at South Mountain Community College, they knew it was not only an act of obedience but a call that would flourish.

The Winters were first approached to mentor Christian Challenge missionaries by table outreach on campus. They started by creating awareness of their Bible study and meeting students at the South Mountain campus. Working full time, Scott took every vacation day available to be present.

“The need was greater than tabling,” Scott says. “Students actually wanted to be discipled.”

It quickly became apparent that the need for a Christian presence at South Mountain was great.

“We began praying and asking what it would look like if we did this full time,” Scott says. “It was laying on our hearts pretty heavily.”

The decision to walk away from the security of their careers to give selflessly to a campus ministry without a foundation and to put God’s desires before their own was daunting.

“It was not only submitting to God the task but submitting to God our lives,” Scott says. “It was a big deal to walk away from a career in its prime. But my issue was putting too much confidence in my abilities instead of putting my trust in God.”

It was a warm morning in May 2020 when their path became clear. Scott and Amy had been invited to a missionary training provided by Christian Challenge. With the question of commitment still on his mind, Scott hesitantly made for the door to attend the training. He was stopped by his 11-year-old daughter.

“I asked my daughter, ‘What do you think of daddy becoming a missionary?’ She said, ‘What does God want you to do?’” Scott recalls.

As a father and driven businessman, Scott questioned whether he would be able to provide for his family while committing his life to full-time ministry.

“I did not know how this was going to work,” he says. “[But my daughter said] ‘Daddy, God’s taken care of us our whole lives. What makes you think if you’re doing His work that He’s not going to take care of you?’”

It was then their path became clear — God would provide. With that, the Winters launched headfirst into full-time ministry. They began by meeting students. When the pandemic only permitted online learning, the Winters opened their home to students to meet for discipleship and Bible studies.

“We had tried so many things,” Amy says. “It was working but not flourishing because we were doing it our way. When we submitted to God, it just grew and grew.”

They partnered with their local church, Laveen Baptist Church, where they are members. They were met with a congregation that fully embraced their work and invested in the lives of their students.

“To have that personal relationship with the pastor is awesome,” says Adrian Cruz, a student leader in Christian Challenge.

For Cruz, becoming a member of Laveen Baptist was one of many ways he plugged into the ministry. Having not only a campus community but a local church who encouraged and spiritually fed Cruz and his peers opened his eyes to the essence of fruitful ministry.

Great change for God’s kingdom often comes in small steps of obedience. For Scott and Amy Winter, it started with the willingness to meet the needs of individuals, to make a lasting impact in the hearts and lives of students at South Mountain Community College.

Like the Who’s Your One evangelistic emphasis that challenges believers to pray for and share the gospel with one person, Amy invites people to take a step.

“Get to know your one,” she says. “Invest in a college student or other people.”

God will be glorified through your obedience.

Ellie Wendt is a senior at Arizona State University’s Walter Cronkite School of Journalism and Mass Communication and an apprentice with Christian Challenge.

–As believers walking in faith, who is your one? Are you investing in the advancement of God’s kingdom through small steps of obedience? This can look like inviting a student into a discipleship relationship. It can be stepping up to volunteer at a college ministry table outreach.

–Encourage members of your church to get involved. Offer students living on campus rides to church. Take the initiative to introduce members to young adults and develop relationships within the church.

–Pray for the ministry of Christian Challenge. Pray that students will be receptive to the gospel and bold in seeking community. Pray for gospel conversations in classrooms and in the dorms. Pray that God will raise up strong student leaders.