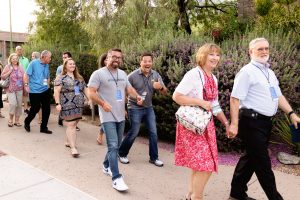 After months of leading churches through a pandemic, more than 150 Arizona ministry couples got a much-needed break.

From July 15 to 17, couples from churches across the state participated in the third Pastors and Wives Retreat, spending two nights at the Loews Ventana Canyon Resort in Tucson.

To participate in the retreat this year, couples paid $195 for the weekend, with the majority of the funding coming from the Arizona Mission Offering, said Keith Henry, who led the team that planned the retreat.

Since 2015, the Arizona Southern Baptist Convention has hosted the retreat every three years to give ministry couples a chance to relax, refresh and recharge — the theme for the weekend.

This is pampering with purpose.

“The retreat’s purpose is a recognition that the role of pastors and wives is pretty much a high responsibility, and there’s a sense that you’re on the clock all the time,” Henry said. “For pastors, most things that they attend, they are in some way in charge of it … so the idea of the retreat was: ‘We want you to relax.’” 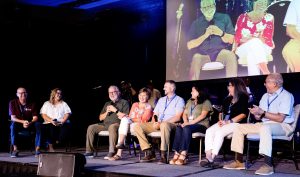 Henry said he began meeting with the ministry couples by Zoom last year, navigating COVID-19-inflicted nuances while simultaneously planning how to pamper pastors and their wives.

Part of that included gifting the women in attendance with tote bags stuffed with goodies and giving each couple cash for a Friday night date night followed by a performance by Christian comedian Bob Smiley. 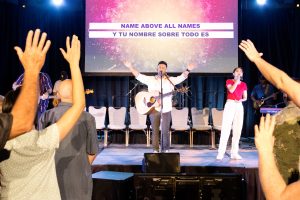 Worship (in a mix of English and Spanish) was led by the band from the church Tierra Fertil in Yuma. And Ed Litton, who was elected president of the Southern Baptist Convention in June, and his wife, Kathy, spoke. Although the Littons do not live in Arizona, Ed Litton has Arizona roots.

“We were looking for a pastoral couple that would have name recognition that would also have a sense of affinity and ownership in Arizona,” Henry said, adding that the planning team booked the couple prior to Ed Litton’s election.

Ramon Osorio, national church mobilizer for the North American Mission Board, and his wife, Rosana, led a morning session for Hispanic pastors and their wives.

And while the two-night retreat certainly offered spiritual teaching and encouragement, it also made plenty of room for play and connection.

“I was very encouraged by conversations that I had by the pool and over dinner and over desserts,” said David Gainey, pastor of Oasis at Rita Ranch in Tucson. And while he enjoyed both the worship music and Bible study, he added, “The relationships are always the highlight for us.”

Gainey and his wife, Hope, said this was their third retreat and a rare opportunity for them to spend time together without their kids and connect with other couples who understand life in ministry.

“It gets you excited about what you’re doing,” Hope said. “Because even if [ministry] is a struggle sometimes, we’re all struggling, and yet God is using us. And it’s really good to be heard and have people actually understand what you mean.”