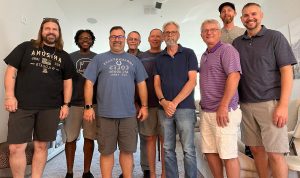 After a year of meeting via Zoom, eight of the nine pastors who particpated in the Practical Shepherding cohort, which was facilitated by Keith Durham, met in person for their final session.

Over the course of a year, a group of nine pastors met weekly via Zoom, exploring what exactly it means to lead a church and do it well.

In September, they finished their walk through Brian Croft’s Practical Shepherding materials, celebrating with lunch in-person after more than a year online.

Pastors from around the state participated in the cohort, with representation from six associations, said Keith Durham, church health facilitator with the Arizona Mission Network of Southern Baptists and facilitator of the group’s discussions.

“Some of these guys already knew each other, but some didn’t,” Durham said. “The fact that they gained relationships with the guys in the cohort, that was probably the biggest takeaway.”

Durham launched the year-long cohort in August 2021 to provide a resource and encouragement for pastors leading in church revitalization or replant contexts or for those seeking to train elders or pastors within a church. Together, the cohort watched videos and read and discussed 10 books about pastoral ministry, with topics covering everything from managing church finances to officiating weddings and funerals.

“I think everyone on the call was seminary-trained, but some of them were in their first pastorate, or some of the topics were topics they had never really thought of or discussed before,” Durham said.

Bryan Jerry, lead pastor at Light in the Desert Church in Mesa, was one of the leaders Durham recruited to help guide the cohort.

“I walked away with lots of encouragement,” Jerry said. “I think the biggest encouragement was to see so many other likeminded pastors trying to be faithful to God’s Word, first and foremost.”
Durham says the Pastoral Shepherding materials are “designed for someone who feels called to the pastorate or is already in the role of a pastor.” He adds that the materials could be used to train lay elders or a first-time pastor.

Jerry said as his church looks to bring on additional leaders in the future, he intends to make use of the materials in the discipleship process.

Next Steps
– To purchase or learn more about Brian Croft’s Practical Shepherding materials, visit practicalshepherding.com. You can also access some of the materials by contacting the office of the Arizona Mission Network of Southern Baptists.
– Pray for the pastors who serve at your church and in your city.