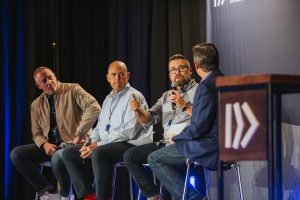 North American Mission Board (NAMB) trustees, meeting in Phoenix Feb. 14-15, spent time with area church planters and celebrated a new suite of resources NAMB is offering to new planters who are endorsed through its Send Network church planting arm. The meeting was hosted by Cross Church Surprise, where Jackie Allen, Arizona’s NAMB trustee, is lead pastor.

“This is Arizona Statehood Day, and Arizona Baptists have no better partner than the North American Mission Board,” Johnson said.

Johnson later joined NAMB president Kevin Ezell on stage with Steve Bass to share some of the unique challenges involved with planting churches in the West along with sharing a history of Baptist work in Arizona. Bass served as executive director of the Arizona Southern Baptist Mission Network prior to Johnson and is now vice president of convention relations for NAMB.

Earlier in the day, trustees loaded buses and traveled to Valley Life Church Tramonto and Cross Church Phoenix to hear the stories of local church planters and get to know them better.

Brian Bowman, NAMB’s city missionary to Phoenix, told trustees there is not a hostility toward the Gospel in the city, but a growing indifference.

“People in Phoenix believe you should have a church just like you have a membership at a fitness club,” Bowman said. “But you probably never show up at either.”

Church planters are playing catch-up in Phoenix. Arizona regularly scores near the top of “fastest growing state” lists, and Phoenix grew faster than any other large city in the United States between 2010 and 2020.

NAMB president Kevin Ezell and Hance Dilbeck, president-elect of GuideStone Financial Resources, shared that church planters assessed and endorsed by NAMB’s Send Network in 2022 will, for the first time, have the opportunity to enroll themselves and their families in GuideStone’s Value Health 5000 plan. Send Network will cover 100 percent of the premium for an entire family for 12 months, after which, the church plant will be required to take responsibility for the premium.

“This historic achievement would not have been possible without the hard work of Hance Dilbeck and his team at GuideStone,” Ezell said. “We are grateful for the partnership that has made this possible.”

Dilbeck expressed GuideStone’s appreciation for the opportunity to be involved in the project.

Ezell also highlighted additional services NAMB is offering new planters, which include a bookkeeping service, an online tithing platform and other digital tools.

At their full board session on Tuesday, Trustees also received several reports and voted to approve multiple resolutions. Highlights included:

In his report to trustees, after detailing the new church planter resources, Ezell spotlighted how NAMB has built its primary ministry areas around meeting the needs of pastors. This includes leadership development, evangelism resources, encouragement and care through Timothy+Barnabas retreats, as well as church planting and compassion ministry resources through Send Network and Send Relief.

“Every church can be involved,” Ezell said. But with only around 5,000 churches specifically engaged in church planting, he added, “There is still tremendous opportunity here. A church will be stronger if they start looking outside themselves.”

Repeating the need for more workers in the harvest field, Ezell said, “We could plant 100 more churches tomorrow if we had the church planters. They are in your churches. We have to disciple and multiply them.”