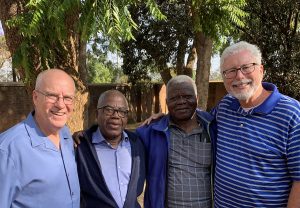 They spent 16 days on the continent.

John Dina, long-time IMB missionary to Mozambique, invited the team to meet with national leaders to train and share their experiences. Dina served as their translator.

“There is a shift toward working in partnerships with these conventions,” Johnson said. “Southern Baptist missionaries have been working in these countries for many years. Now IMB and national leaders are working together to spread the Gospel to unreached peoples and make disciples in their countries.” 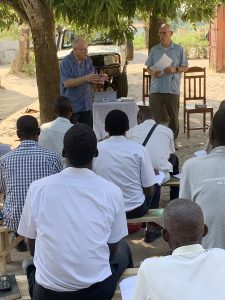 The team met in Malawi for five days with IMB leaders and national convention presidents and general secretaries from Angola, Mozambique, Malawi and Zambia.

Johnson shared Southern Baptist work in Arizona as an example of how state conventions work in the U.S. to cast vision for churches to reach people with the Gospel. Garrison served as pastor, leading devotions and Bible study.

Garrison participated in these discussions, sharing how Calvary Baptist Church in Lake Havasu City established a culture of outreach and teamwork. Johnson was the pastor-leader who brought the devotions and Bible studies. 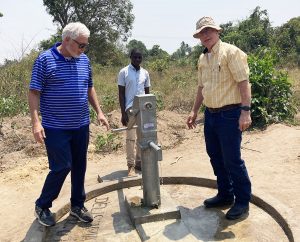 Johnson and Garrison visited several places where water wells were provided through the generosity of Calvary Baptist Church in Lake Havasu City, which has funded 86 wells in that area, providing clean water for thousands of people. This has opened many doors for church planting.

“We are blessed as Southern Baptists to have incredible missionaries serving in difficult places around the world!” Garrison said. “Our missionaries are competent, committed and passionate to see their corner of the world know Jesus, whatever the cost. It was a privilege to serve with them in a limited way for our trip.”

One last event in Mozambique was a farewell service for John and Wanne Dina. After serving the area for 29 years, they are being reassigned to Kenya, where John will be the training leader for IMB’s Sub-Saharan Africa affinity group. The work is strong in Mozambique and national leaders are in place to carry it forward. 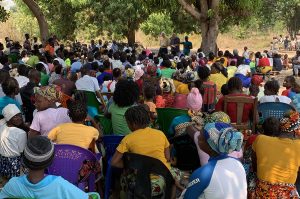 People gather to express appreciation for John and Wanne Dina and their work in Mozambique.

Johnson also met with several pastors who are riding motorcycles to take the Gospel to remote and unreached places in Mozambique. The motorcycles were provided by funds given in memory of Jeremiah Johnson, David and Diana Johnson’s son. Jeremiah, an IMB Hands On missionary, died in a motorcycle accident in 2010 on the way back from sharing the Gospel in a rural fishing village.

“When we planned this trip, we were not aware that John and Wanne Dina would be moving to Kenya at the end of this year,” Johnson said. “They are our connection with the people and places where Jeremiah was working. … In essence, that means this trip may be the last time we have the opportunity to see and work with them there.

“For that reason, it felt like it was also closing a chapter for us in Mozambique. While that was emotional, it was also meaningful to see how God has blessed the work there and used Jeremiah’s life and death to expand the kingdom and spread the Gospel. We are grateful for God’s grace and peace that He has given us through these last 12 years in all that we have seen take place in Mozambique.”