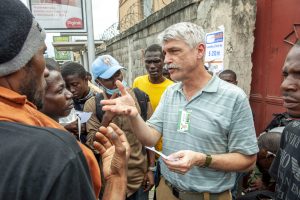 Men in Haiti ask an IMB missionary for aid for their neighborhoods that were devastated by an earthquake. IMB Photo

For 176 years, one thing has held us together. Through wars, pandemics, political controversies, economic crises and theological battles, everything else took a back seat to this cause.

It is the DNA of our convention. It was the reason it all began back in 1845 in Augusta, Georgia. Despite the issues that tainted those humble beginnings, the real motivation was rooted in one overpowering desire — to get the gospel to every man, woman and child on the planet.

According to the constitution that was written at that time, the Southern Baptist Convention was established “for the purpose of carrying into effect the benevolent intentions of our constituents, by organizing a place for eliciting, combining, and directing the energies of the whole denomination in one sacred effort, for the propagation of the gospel.”

The first two organizations established by the newly formed convention were boards for Foreign and Domestic Missions, now known as the International and North American Mission Boards, respectively. They immediately began the process of sending and supporting missionaries.

It wasn’t until 1925, however, that this effort was combined into one process of funding called the Cooperative Program. Until then, the mission boards and other organizations vied for support among the churches.

The result was not only chaotic for the churches, but disastrous for the organizations themselves. They never knew how much funding they could raise, and, therefore, were always operating at a deficit and often in debt.

In 1925, the messengers at the convention voted to create a unified budget that would support Southern Baptist mission causes to reach the world with the gospel. It became known as the Cooperative Program.

The process was simple: church members gave their tithes and offerings to the local church, the local church gave a percentage or designated amount to support missions in their state and the nation and the world through the Cooperative Program.

The result was amazing! 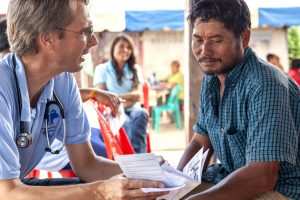 Dr. Doug Derbyshire, an IMB missionary from Arizona, consults with a patient during a medical clinic in Thailand. Your Cooperative Program gifts support his work. IMB Photo

State conventions were able to carry out missions and ministries in their own areas. The Domestic and Foreign Mission Boards received funds to send out missionaries in the United States and around the world. Seminaries were supported to train missionaries and ministers. Missionaries did not have to raise their own support, and soon, Southern Baptists became the largest sending organization for missions in the world.

There have been many challenges and conflicts that could have distracted or deterred this work through the years, but Southern Baptists have always put missions first.

We are not a perfect people, nor have we always done everything right, but as Jeff Iorg, president of Gateway Seminary, says, “It is astounding … what this imperfect denomination has accomplished. … God has used Southern Baptists, despite their flaws and while they are flawed, to accomplish more temporal and eternal good than any other denomination in American history.”

In our current context, there is no lack of troubling issues that have become all the rage on social media and the internet. Some are more significant than others, but none can even begin to rival the importance of our mission.

When I think of the Cooperative Program, I do not think of balance sheets and funding formulas.

I see faces of people I know and love who are serving in remote and sometimes dangerous places in the world. I think of people groups who have yet to hear the gospel and places that do not have a gospel-preaching, Bible-believing church right here in our own state. I think of the estimated 155,473 people who die every day worldwide without a saving knowledge of Christ. 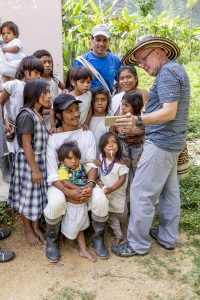 An IMB missionary shares an evangelistic video with villagers in Colombia. IMB Photo

For me, the Cooperative Program is personal and passionate.
Mission matters most.

The Great Commission to make disciples of all nations is our mandate (Matthew 28:19-20). The power of the gospel unto salvation for everyone who believes is our message (Romans 1:16-17). The love of Christ that compels us is our motivation (2 Corinthians 5:14). And the vision of a vast multitude around God’s throne from every tribe, language and nation is our measure (Revelation 7:19).

The Cooperative Program makes it possible for you and your church to reach all the world, all the time with the gospel. From Arizona to the uttermost parts of the earth. For the glory of God. To reach the lost. To expand God’s kingdom. Now, more than ever!