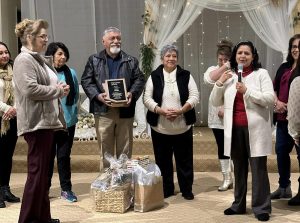 With numerous women gathered around on stage, Evelia Rodriguez (with microphone) honors Mirsa Amaro (center), who is accompanied by her husband, Fernando.

Mirsa Amaro has faithfully devoted 30 years of ministry to Arizona Southern Baptist Hispanic women through Ministerios Aurora. She was honored as the ministry’s leader during their fall retreat.

“It was a complete surprise,” she said. “I was speechless! My heart has had a passion for the Hispanic women of Arizona these last 30 years, and it has been a blessing to see the women over the years come to know God, experience him and share him with their families. To see these same women rally together and express their gratitude was overwhelming and a beautiful blessing.”

The ministry is named after Aurora Aguilera, a member of Iglesia Bautista El Faro and a mentor and friend of Amaro. In 1992, Aguilera asked Amaro to join her in planning the first retreat. The two traveled the journey together until Aguilera’s passing.

“I believe Mirsa has not only inspired my life with her example but also the lives of many women in our Hispanic Baptist churches,” said Evelia Rodriguez, wife of Ramón Rodríguez, pastor of Iglesia Bautista Central in Phoenix.

“Mirsa has shared women’s ministry training, Sunday Bible School training, Vacation Bible School, preschool ministry, and biblical counseling with women in many of our Arizona Hispanic Baptist churches. We bless the name of Christ for this servant of faith and joy.”

From the beginning of Ministerios Aurora, all women from Southern Baptist Hispanic churches were invited. Twenty-six women from two churches attended the 1992 retreat.

This year, 176 women and teens from 18 Arizona churches gathered for three days of praise, worship, prayer, teaching and fellowship. Close to 400 women participated the year churches from California, New Mexico, Texas and Mexico gathered together.

“This ministry has been life changing for me as well as the many women who have accepted Christ and led their own families to Christ over the years,” Amaro said. “It has been a true blessing to be a part of life changes, reconciliations, redemption stories, answered prayers and the list goes on! 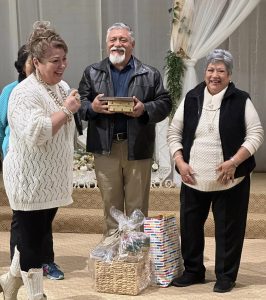 Mirsa Amaro (far right), accompanied by her husband, Fernando, is honored at the Ministerios Aurora retreat for her 30 years of service to the organization.

“This is a grassroots ministry and it has been special to see women who attended our events years ago now serving on planning teams, leading as conference speakers, and helping to organize our events. We watch young women grow and become ‘Titus women’ (Titus 2) to the younger generations.”

Amaro said she will continue to lead as long as God calls her to the role. She has been building up and training a team of leaders for the future of Ministerios Aurora.

“Evelia Rodríguez is a servant leader of the ministry and will see the ministry into the future,” Amaro said.

Amaro encouraged anyone who has felt a calling from God to get involved or start something new in their church or community to do it.

“There will be challenges along the way,” she said, “but there is nothing better than serving our Lord. I thank God for the years of ministry he has allowed me prior to Ministerios Aurora, during my time there, and what is to come.

“I am grateful for my husband, Fernando Amaro Sr., who has stood by my side and supported this ministry! And we are thankful for the continued support and funding from the Arizona Southern Baptist Convention.”