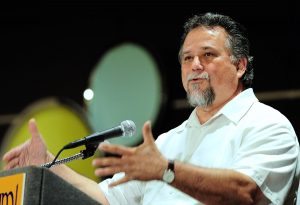 Louis Spears has been preaching and planting Baptist churches for 48 years. He spent the last 12 years as a North American Mission Board church planting catalyst in the East Valley region of greater Phoenix and retired as a NAMB missionary March 31.

“We are thankful for Louis Spears and the missionary work he has accomplished in Arizona over the years” said David Johnson, executive director of the Arizona Southern Baptist Mission Network. “He came to Arizona to focus on reaching one people group and was instrumental in reaching many.

“Louis became a leader in his association as well as our state in finding new and creative ways to reach pockets of population that were underserved and unnoticed. We are grateful that he will continue his entrepreneurial work in Arizona even after he retires. We are blessed to have a missionary like Louis in our state.”

Spears has been serving among Arizona Southern Baptists since 1994 as a pastor, church planters, part of the Valley Rim Baptist Association staff and as a NAMB missionary.

“[Now,] I’m not a lead pastor,” he said. “I support other pastors in house churches through Lighthouse Network. We minister to those who live on the fringe of society: the homeless, kids aging out of the [foster care] system, women with disabled children, the food insecure, the Travelers.”

Monty Patton, NAMB Send Network Arizona director, said, “Louis has served Arizona by planting churches through out the East Valley and beyond. He’s a true missiologist who has led the way in planting the Gospel in multi-housing, and he is not done yet. I am personally excited to see how the next chapter our Father has for Louis is going to push back lostness in our state.”

Spears will continue building the Lighthouse Network, with a focus on planting micro churches in multi-housing settings. A high percentage of people who live there would not go to anyone’s church, he said, but they are interested in helping others who need it. Spears and his team have been taking the church to them, to let them become the church.

The ministry has been successful in encouraging people in these communities to build relationships and step up in ways they wouldn’t do on their own. They work beside believers and get to hear life-changing testimonies.

“Louis’s ministry always reminded me that if you desire to see millions saved, you do it the Jesus way: gather a small group and pour your life into them,” said Steve Bass, assistant to the president for convention and associational relations at the North American Mission Board and previous Arizona Southern Baptist Convention executive director. “Making disciples who make disciples was a way of life for Louis long before it became a popular buzzword.”

Spears plans to tap some of the people who are on the fringes of our churches, not asking them to leave their church, but to move from simply attending to being involved.

One of the current ministries is to a group called Singleton Moms (moms with cancer). A group of young Gypsy mothers has provided all of the toiletries for that organization a couple of times.

“We do their Thanksgiving dinners and Christmas dinners,” Spears said. “We pack them all up and send them to the ladies. If they need housecleaning, someone to watch over them or drive them to a treatment, or watch their children, we help them. What we’re trying to do is to move people from just attending church or watching church on TV to get involved, to give them a chance to share their testimony.”

Spears knows he has the support of his peers in this journey.

One of the things that encourages him most is the immediate communication back and forth with others about the things they need and the prayer support, partnership and networking.

“I had a great introduction when I came here,” Spears said. “I was in a replant, and my sending pastor was Byron Banta. He remains an ongoing prayer partner. We walked through many difficult things together.”

People “have been able to connect me with others, whether it was training or experience or teaching or advice,” he said. “God has placed them in those places at the critical times of my ministry life here.”

Prior to moving to Arizona, Spears helped start Woodcrest Baptist Church in Guthrie, Oklahoma, in 1974, when he was 19 years old.

“I’m going to work as long as God gives me energy to serve,” he said, “but I realize I need to find vibrant young people to come along with us, pick it up and learn.”