ZonaMEN changed the lives of men for eternity. The event was held April 30-May 2 at Lost Canyon outside of Williams.

During the first night, speaker Bob Reccord felt the prompting of the Holy Spirit to abandon his outline and move straight to a gospel presentation. When finished, 27 or more men were standing at the front proclaiming publicly Jesus as Lord.

Only the Lord knows how many of these were first-time decisions, but most of them appeared to be so. There were additional decisions for Christ as men consulted with each other during cabin time or spoke with Reccord after the meeting.

ZonaMEN also changed the lives of the families of these men. At the end of the second service, a significantly larger group of men was standing at the front, committing to heal the broken relationships in their lives.

Reccord had illustrated this need by starting the sermon with a collection of river rocks spread around the stage. He described them as hurts we have encountered in our past — a father’s discipline taken as rejection or a harsh word from a spouse remembered and magnified over time.

He then gathered each of these stones into a knapsack and carried it for 30-plus minutes through the sermon. When he extended the invitation, asking men if they would like to rid themselves of that weight, he tossed it across the stage, allowing the loud thump to echo in everyone’s thoughts, before inviting men to come forward. 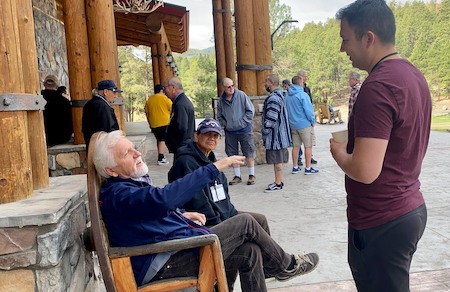 ZonaMEN was attended by about 200 men from 18 different churches around the state. This is the fifth such event, and the first one after being cancelled in 2020 because of COVID-19. The camp was still implementing a number of safety measures, but those who chose to attend were greatly blessed for their faithfulness.

As has been the case since the inception of the event, the servers for the weekend were from Set Free, Needles. This church is full of people who have put their past hurts behind them and get excited about serving Jesus.

Under the guidance of the staff of the camp, they handled cooking and serving the food at meals, as well as operating the coffee shop and store. The men attending the event enthusiastically gave a love offering to assist their ministry and show their gratitude for the humble service of this group of saints.

Most years, the camp provides great recreational opportunities on Saturday afternoon. This year, the zip line, giant swing and climbing wall could not be opened. However, the basketball courts, game room and pool were all in full swing.

In addition to these activities, Cheryl Reccord offered an optional breakout session called “What Every Wife Needs … and Wants.” Well over half of the men attended the session, and many spoke with her one-on-one regarding their particular situations.

Next year’s event is scheduled for the weekend before Mother’s Day once again, April 29-May 1. The coalition that plans the retreat will now be led by Zach Papuga from CalvaryPHX. Speakers, cost and other details will be announced soon. All of our churches are encouraged to participate so that we can strengthen our churches by strengthening our men.