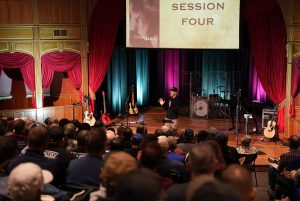 Eight men gave their lives to Christ and about 100 men made decisions to rededicate their lives to Christ at ZonaMen on the weekend of April 29-May 1. The event was held at Young Life’s Lost Canyon Camp outside of Williams and was attended by more than 350 men from 28 churches, almost all of which are Arizona Southern Baptist churches.

The speaker this year was Vince Miller from Resolute. Miller started Resolute as a ministry to men in 2014 at the strong suggestion of his wife. Although he was very successful in his previous ministry, she pointed out he was not fulfilled and his calling was in developing Godly men. He said the purpose of the ministry is to “drive them to the Bible and to brotherhood.”

Miller’s theme for the retreat was King David, God’s Man. He mentioned having done an annual character study on David that laid the groundwork for the materials presented at the retreat.

“Christian men aspire to be like Him,” Vince said. “David hits on every topic” that men need to address, he said. 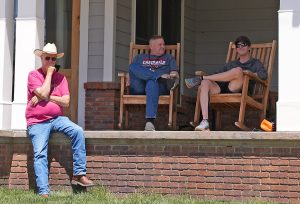 Insights from the messages included growth points such as acknowledging that apathy is the greatest problem men face and that every man needs other men, especially someone who is a heart-level friend and someone who will hold him accountable.

Breakout sessions allowed the men to learn how to form accountable relationships and groups and and how to be involved in leadership of future retreats by joining the ZonaMen Coalition. 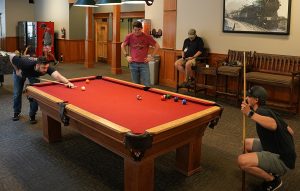 This retreat originated in 2016 as the Metamorphosis Men’s Retreat, but morphed into the ZonaMen Retreat in 2020 when it transitioned to being led by a coalition of Arizona Southern Baptist churches. Zach Papuga of Calvary, Phoenix, became the director of the event this year.

“We not only witnessed the miracle of men making decisions to follow Christ for the first time, but saw many of the guys take real steps to become more transparent, accountable and connected with other men and leaders from their groups,” Papuga said.

The band this year was comprised of a group of music personnel from Calvary, Phoenix. They set the stage for worship and life transformation at every large group session. The attenders also had multiple recreational opportunities to test their courage, including archery tag.

Set Free, Needles, has served for many years for the event. This year because of the increase in attendance, they brought 42 servants — their largest group thus far. They accomplished this by inviting workers from another Set Free location — Set Free, Paulden. 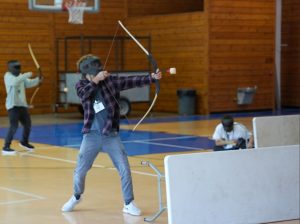 Their service does a great deal to help keep the cost of the retreat as low as possible. A love offering was taken to help Set Free continue their work.

Next year’s retreat will be April 28-30 at Lost Canyon. In addition, there will be a ZonaMen Conference at Cross Church, Surprise, on September 24. The coalition will continue to look for opportunities to strengthen churches by strengthening the men of the church.

If you want to learn more about Miller and Resolute, visit beresolute.org. There, you will see his men’s daily devotional, which is accessed by more than 100,000 people each day. You may sign up to receive it at beresolute.org/mdd.