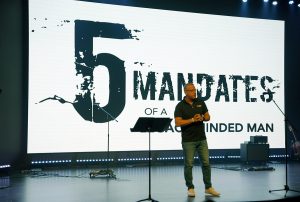 Joe Pellegrino speaks at the ZonaMen Conference in Surprise.

Pellegrino used the words of 1 Corinthians 16:13-14, “Be on your guard; stand firm in the faith; be men of courage; be strong. Do everything in love.” Each phrase of this verse became one of five mandates he presented to attenders to help them become the biblical definition of a man. Each of these mandates was taught in its own section, with a discussion guide as the men broke up into small groups.

These groups, although formed spontaneously, were successful in furthering the resolve of the participants as they realized their challenges were not unique and therefore, they were not alone in the struggles they face.

Pellegrino was also a master at getting the men involved through illustrative activities. Early on, he sought who in the room could throw a football the farthest and then offered a deflated ball for the purpose. In today’s world, men are still designed by God with purpose, but the world has let the air out of them, stealing away their functionality to accomplish that purpose, Pellegrino explained.

At lunch time, the men were fed outside and again given time to interact in meaningful ways. 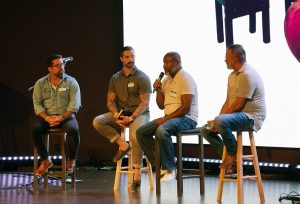 Brian Bowman (from left), Jason Feeser, Jason Flowers and Jackie Allen provide examples on how to apply the 5 mandates.

The schedule was fortified with two panel discussions, both elaborating on how to make practical application of the points that were being covered. As Pellegrino said, “The first part of living is to gain wisdom and courage, the second part is to put it into actions.”

ZonaMen is a coalition of churches cooperating to facilitate men’s ministry through events seeking to strengthen the church by strengthening the men of the church. Every church will benefit when their men are strengthened in their relationship with Christ and their daily Christian walk.

The ZonaMen Coalition is preparing for the annual ZonaMen Retreat the last weekend in April 2023. The speaker will be Tierce Green, director of Authentic Manhood Initiative.

Pellegrino reminded the men, “Cemeteries are full of God-sized dreams that died in the life of a man who said, ‘I can’t do that.’”