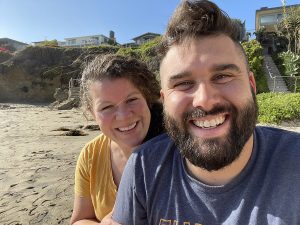 In April, Kyle and Marisa Rosas followed God’s call to move to Arizona from Montana so that Kyle could serve as a church planting catalyst across all of northern Arizona. As part of the North American Mission Board Send Network, they left one vast territory for another.

The Rosases prayed for years, believing God was leading them to plant a church in Arizona. They never imagined that God had bigger plans.

With Kyle having been equipped with a master of divinity in missiology and intercultural studies from Mid-America Baptist Theological Seminary, the Rosases applied to the International Mission Board to serve overseas. Again, God had a different plan.

“The Lord made it perfectly clear that He was calling us to Montana,” Kyle said.

After graduation, Kyle and Marisa joined with friends Bruce and Jessica Crockett to plant Gateway Church in Columbia Falls, Montana, where Kyle served as pastor/planter for 5 1/2 years. In that time, Gateway sent a family to help with a Christian school in Oregon, a woman to a church plant in Denver, a family to Guatemala and another family to help start a college campus ministry.

Marisa plays a vital part in the process. She uses her gifts, talents and passion by connecting, caring and coaching both new and established church planters’ wives.

“We’re missionaries and church planters at heart,” Kyle said. “Wherever we’re living, we’re going to be part of that.”

Rosas finds commonalities between the people of Montana and northern Arizona, and he believes God has given him an affinity for these people to prepare him for this role. As in Montana, he will be serving on reservations, in rural areas and in rapidly expanding cities and towns.

“The vastness of Montana and northern Arizona remind a man and woman that they need God,” he said. “So, we’ve come to this vast territory looking at God saying, ‘You’re going to have to do this because we can’t do it, but you can.’ When we want to see God work, we pray and in His grace and His mercy, He responds.”

Prayer is foundational in their mission.

“I’m just excited to be on the Father’s team, serving him with my brothers and sisters here in Arizona,” Rosas said. “I’m looking forward to what God’s going to do.”

Rosas will be serving with Arizona’s Send Network Director Monty Patton and other church planting leaders. He will be working in the area covered by Tommy Thomas before his retirement earlier this year.