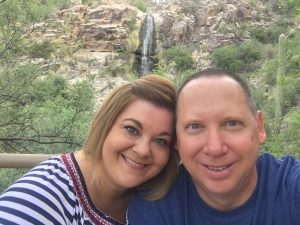 Keith Durham, church health facilitator with the Arizona Southern Baptist Mission Network, is leaving to use his gifts and experience as director of missions for Concho Valley Baptist Association in Texas. His resignation is effective Dec. 15.

Prior to becoming pastor in Arizona City, Durham served on the staff of Trinity Southern Baptist Church in Casa Grande for 10 years filling a variety of roles, including youth minister, campus pastor, and minister of education and administration.

Terri has been serving as the state convention’s social media strategist for the last five years.

“We are thankful for the ministry of Keith and Terri Durham in these past five years!” said David Johnson, Arizona Southern Baptist Mission Network executive director.

“They have crisscrossed the state helping churches take steps toward greater health,” Johnson continued. “Keith’s absence will be felt in churches around our state and among pastors that he has worked with so closely. Terri has also blessed us with her heart for ministry wives and helping us communicate what is happening among us through social media.

“We pray God’s blessings on them as they begin a new ministry leading the Concho Valley Association in Texas. We will count them as missionaries from Arizona!”

Durham received a doctor of ministry degree with a specialization in church revitalization at Midwestern Baptist Theological Seminary.

“I wanted to help this small rural church revitalize and help leaders to move forward,” he said. “That’s when I began to have a heart for our new and established churches to get them back toward good missional health.”

Durham uses his spiritual gifts and strengths of encouragement, loyalty, empathy and peacemaking to walk along side pastors — to be a friend.

“I know what it’s like to be a pastor,” he said. You can feel isolated, because you don’t have someone to share what’s going on in your life or ministry.”

This year he took a series of conferences to groups of pastors in Phoenix, Yuma and Tucson. Groups of regional pastors now meet in person or on Zoom to connect and develop relationships.

“The community and the culture have drastically changed, and the church doesn’t always recognize what’s happening around them or how to reach out,” Durham said.

Using both Revitalization and ReFocus models, Durham and fellow teachers have shepherded churches through significant growth by helping them find their sweet spot: who they are and how they can be most effective in ministry.

Quartzsite Southern Baptist Church is one example. The town’s elementary school closed during COVID-19, and the building was condemned. The children would have had to be bused 25 miles to another school. When the church reviewed its passion, purpose and the community’s need for a school, they decided to start their own.

That school became a reality this fall. In additional to a sound education with a Christian world view, students are studying the Bible and have chapel daily.

Durham is grateful for his time with the Arizona Southern Baptist Mission Network.

“What a great staff we have,” he said. “It has been a privilege and a blessing to serve our churches and pastors. I’ve received much more blessing from them than anybody received from me.

“I’m very grateful and appreciative to Keith Henry, David Johnson and Eddy Pearson for their help and mentorship,” he continued. “They invested a lot in me personally, and they helped make me a better leader.”

As director of missions for Concho Valley Baptist Association, Durham will focus on 42 churches in San Angelo and surrounding rural areas. He will be doing much of what he does now: helping churches in transition, walking alongside pastors and helping them fulfill their God-given mission in the kingdom’s work.

“Leaving is bittersweet,” Terri said, “but God knows what’s ahead for us. My time in Arizona has been a time of equipping that helped shape who I am as ministry wife, as a person, a leader and a Christian in general. I feel ready for the next step but will miss living in this beautiful state. I expect to be telling people about the Arizona for a long time.”