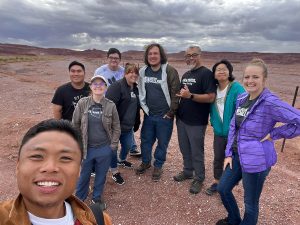 Members of the Hawaii mission team and Christian Challenge NAU gather in the Navajo Nation.

Nearly a decade ago, Challenge Church Flagstaff and Christian Challenge at NAU embarked on a journey that would connect them with the collegiate ministry and several churches of the Hawaii Pacific Baptist Convention on the island of Oahu.

Through the years, teams from northern Arizona have traveled to serve alongside believers in Hawaii who were sharing the Gospel in their communities.

This was the first mission trip for the one-year-old Restoration Community Church, Pastor Brad Dell said. It sprang from the many years of blessings received from the Arizona ministry.

“These past years, our Hawaii Baptist community has been nourished by service teams from Challenge NAU, so our team served from a deep well of love for our Arizona brothers and sisters. This cycle of shalom has blessed abundantly, and we’re thrilled to continue in this kingdom partnership.” 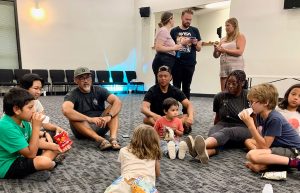 The next few days, they lived out James 1:27 in a partnership with Lauren Belcher of Arizona Baptist Children’s Services & Family Ministries, Challenge Church, NPHX Church in Flagstaff and East Valley Baptist Church. For three nights, the group provided a creative, energetic parents’ night out for foster families served through ABCS.

Serving with East Valley Baptist Church, plans changed from tending the church’s community garden to disaster relief in a community just north of Flagstaff that had been devastated by summer fires and subsequent monsoon flooding. 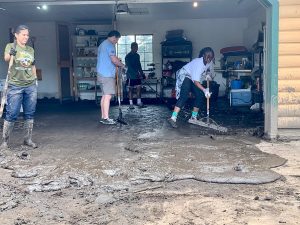 A few days prior, heavy rains poured down the mountain across the burn scar, which resulted from forest fires, and straight through the church property and surrounding area, depositing large amounts of mud and debris. One church member’s property and part of her home were devastated by the mud flow.

The team served several hours removing mud from the home, pressure washing belongings and hauling away damaged items. Once the mud was removed, they placed sandbags around the home to protect it from future rains, an effort that paid off a few days later.

“As we worked grueling hours doing manual labor, I was able to rely on God’s strength rather than my own,” Abelle Tejeda said. “No matter how much my body wanted to stop working, He gave me the strength to get the job done, not for myself but for the benefit of someone else to feel His love through me.”

Up to that time, water had not entered the church building, so sandbags were placed around the exterior. These prevented the building from flooding when, a few days later, a storm flooded the 10-acre church property.

“I learned God can be trusted in His timing,” said Arjay Gruspe, pastor of Pawa’a Community Church and BCM Oahu director. “We finished work, and the rains came the next day.” 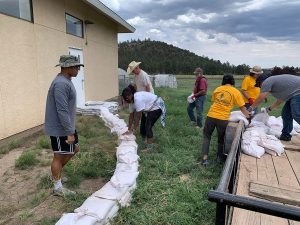 Under the leadership of East Valley Pastor Daryl Bennett, the team drove through nearby neighborhoods knocking on doors and offering to help any way needed. Stopping at several homes, they were able to connect with the residents in an extremely tangible way.

At the final stop of the day, they met Cathy, a senior and recent widow. The team was able to move several pallets of 20-pound sandbags to help divert water and protect Cathy’s home. She couldn’t believe that strangers would drive up to her home and offer help.

The team shared that Jesus had called them to come serve in northern Arizona and love people the way He does.

“God has taught me that leaning on Him will grant me strength,” said Micah Abe, a visiting team member. “When we were sandbagging the widow’s house, I was pretty fatigued. After hearing Pastor Daryl repeatly saying the Lord was giving him extra strength, I started to say it as well. It gave me the extra endurance to complete the tasks at hand.”

In all, the team laid nearly 20 pallets of sandbags. 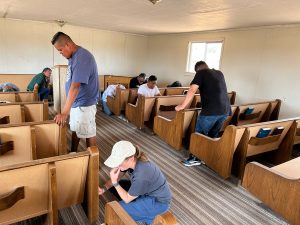 The mission team from Hawaii, Christian Challenge NAU staff and leaders related to A’tsa Bi’toh Baptist Church in the Navajo Nation pray at the church.

On the final day of the trip, the team traveled to the Navajo Nation to meet with Jesse Billy, pastor of First Southern Baptist Church of Tuba City, and church leader Jack Colorado, serving at A’tsa Bi’toh Baptist Church, a church plant.

Seeing these communities, meeting the people and hearing the hearts of their leaders was intended to cast vision for future partnerships and ministry trips.
Ken Reyes serves with Restoration Community Church and BCM Oahu.

“Being able to share a meal and listen to the stories of Navajo elders was so meaningful to me,” she said. “I was really moved by their faith, especially as they are working against the current of their present circumstances and the wound of their collective past. As a young person in ministry, one of the things God revealed to me on this trip was the wealth of wisdom that our elders have to offer.”

This is the power of a network on mission!