Irby called out of retirement to serve Yavapai Association 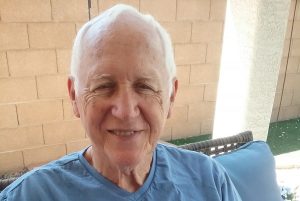 Since retiring as director of missions for the Inland Empire Baptist Association in Spokane, Washington, five years ago, he’s served as interim pastor of three churches in three western states and started a new church in one of those states.

After moving to Dewey three years ago, he became interim associational mission strategist for Yavapai Baptist Association last October. Then, on July 11, he accepted the association’s call to fill the position permanently on a part-time basis.

“We are excited to have Omer Irby partnering with us as the new associational mission strategist for Yavapai Association,” said David Johnson, Arizona Southern Baptist Convention executive director. “Omer comes to us with experience as a director of missions in the Pacific Northwest and as a pastor. He is already making a difference serving the churches in Yavapai Association. We are grateful that the Lord brought Omer and his wife, Alice, to serve with us in Arizona!”

Irby is no stranger to Arizona. He attended Grand Canyon University back in the 1960s when it was Grand Canyon College, and he was pastor of Pantano Baptist Church in Tucson.

Irby left Pantano to become pastor of a church in Fairbanks, Alaska, and went on to be pastor of churches in Oregon and Washington. His last pastorate before becoming director of missions for Inland Empire was in Everett, Washington, for 13 years.
Now, he’s ready for a new venture serving the Southern Baptist churches in Yavapai County.

“These are challenging times when people seem to be flooding into our county,” he said. “My heart is for our churches and pastors to see the ‘fields that are white unto harvest.’ We must rise to meet the challenge.”