In evangelism, ‘the team is key’ 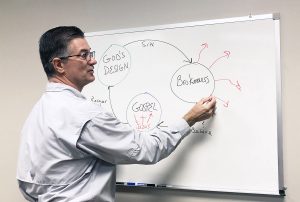 “A lot of people in our churches worship together, pray together and do a lot of other things together. But they don’t take time to evangelize together,” Pearson said. “Jesus invited us to join Him in His mission. We work well together when we join His mission in a group.”

“He sent the disciples out in pairs to share the Good News,” he said. “Upon returning, they gave an account. We need to make sure we have small groups of accountable believers who want to be together in their field of ministry. They get to hold each other accountable as to what works and what doesn’t.”

The percentage of America Christians who don’t share their faith is difficult to nail down, though researchers agree it’s the overwhelming majority. The effects are clearer, however.

As the number of churchgoers has declined alongside the rise of those who claim no religious affiliation – the “Nones” – the number of Americans who are members of a house of worship officially became the minority earlier this year. As recently as 1999 that figure had been at 70 percent.

In addition, a disconnect has developed among nearly half of Millennials as to the responsibility of evangelism and the moral authority to do so. A February 2019 Barna study revealed that up to 97 percent of all practicing Christians believe sharing their faith is essential to their witness. Among Millennials, 73 percent said they knew how to respond when someone asked faith-related questions and just as many felt gifted at sharing their faith with other people.

Nevertheless, 47 percent of Millennials felt it was at least somewhat wrong to share their personal beliefs with someone of a different faith with the goal of that individual’s becoming a Christian. Such a perspective can certainly affect the number of believers involved in witnessing to others.

“A lot of our evangelism attempts take place in isolation,” Pearson said. “We’re told that we’re equipped and to go get ‘em. That sounds good, but as the state evangelism director in Arizona, I know that 90 percent of our people don’t do it. There’s a great fear in evangelizing.”

The minority, the 10 percent, will remain devoted to personal evangelism, he said. The key is to get the others to join them.

“The team is key,” Pearson said. “It gives us an objective, which as the body of Christ means we want to see others join Him in His mission. That mission is to be fishers of men and women, of boys and girls to fulfill the Great Commission.”

While speaking with Baptist Press, Pearson was on his way to a conference in Sedona, Ariz., a hotspot for New Age worship. That practice, he pointed out, is a clear example of those who may be interested in the metaphysical but remain off the mark.

Spiritually speaking, evangelism is speaking to dead people, Pearson said. That fact should be the fuel for Christians to go out and look for opportunities to share the Gospel.

“People don’t know that they don’t know Jesus,” he said. “And, they don’t care. So, I have to be with them because the Kingdom of God is near.”

In addition to the group dynamic, of course, evangelism also happens in the one-on-one encounters God provides. Recently, Pearson was with a group from outside church when a man launched into a 15-minute story filled with vulgar language.

When he finished, the man left with another friend, with Pearson praying for the chance at another conversation. A couple of days later, that chance came.

“I saw him and took a deep breath,” Pearson said. “We caught up for a few minutes and he asked me what I did for a living. That’s when I told him I was a minister.”

The surprised response included a variation of the word, sandwiched by “No” and “way.”

It also included an apology for his language. But then came a 20-minute conversation with Pearson as the acquaintance shared his spiritual background.

Acts 17:32-34 gives the three responses people will have toward the Gospel, he added. Some will accept it. Others will sneer and dismiss it. And yet, another group will ask to talk about it later.

“We want to cultivate conversations with people about Jesus,” Pearson said. “Let’s till it and work the soil.”