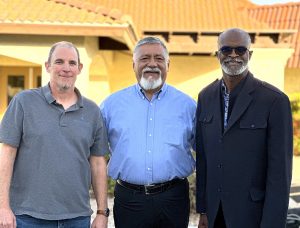 “Next” was the theme of the meeting — a single afternoon worship and business session — held at Avondale Baptist Church in Avondale, Nov. 11. It was attended by 244 messengers and 46 registered guests representing 131 churches.
Messengers made history with the election of officers, selecting the first Hispanic president and first Black first vice president. 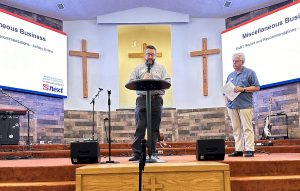 Ashley Evans, senior pastor of 22nd Street Baptist Church in Tucson and chairman of the Sexual Abuse Response Team, presented the team’s report, which included three observations and two recommendations. The recommendations proposed a Churches that Care initiative with 12 standards for churches.

Earlier this year, Arizona Southern Baptist Mission Network President Jack Marslender appointed the eight-member team and two ex officio members to review recommendations coming out of an investigation of the SBC Executive Committee and to make specific recommendations for Arizona. The SBC investigation related to the Executive Committee’s handling of sexual abuse cases in churches.

The Arizona team recognized in their report that churches are autonomous and that the team did not have authority to impose standards on churches. They noted that the Arizona Southern Baptist Mission Network:

–“has already been working to ensure that all … denominational workers have gone through sexual abuse awareness, prevention, and response training, as well as background checks”;

–will offer training for churches, encouraging churches to participate and use resources provided; and

–“is working with Arizona Baptist Children’s Services to provide counseling services and ministry to churches, survivors, the accused, families of parties involved, as well as to church members.”

After more than 50 minutes of discussion, with a show of lifted ballots, messengers approved a substitute motion by Andrew Marquez, pastor of North Swan Baptist Church in Tucson, to remove the recommendations from the report and refer them to the Executive Team, with no action taken to be taken until the 2023 annual meeting. Messengers then voted to receive the amended report.

“The Sexual Abuse Response Team gave you excellent information to work with,” Marslender said. “Do everything that you can to make sure that the children and families who come to your church are safe.”

After the meeting, David Johnson, Arizona Southern Baptist Mission Network executive director, said the 12 standards proposed by the Sexual Abuse Response Team will still be offered as a resource of “recommended practices” for churches to use as they choose. 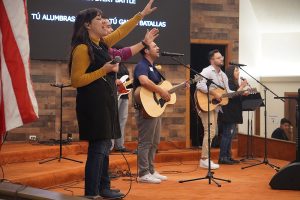 The band from Tierra Fertil in Yuma leads in worship at the annual meeting.

In 2020, messengers adopted a recommendation from the Convention Council to vote the following year on changing the convention’s name to Arizona Mission Network of Southern Baptists. This allowed time for prayer and discussion.

This year, Nate Parrow, an elder at Northern Hills Community Church in Phoenix, made a motion to return to the name originally recommended by the Convention Council. The motion was adopted 94-73 following brief discussion.

The new name is a “doing business as” name change and will not change the constitution or corporate filings. 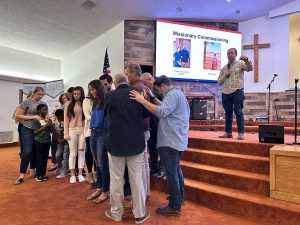 Chris Boggus, pastor of Happy Valley Baptist Church, prays on the platform as three IMB missionaries from his church — Tiffany Ford (in blue with family and friends gathered around her) and Caleb and Tricianne Spacht — are commissioned.

In what may have been a first at the annual meeting, three Arizonans were commissioned as missionaries.

Caleb and Tricianne Spacht will be serving as IMB missionaries in Paris, France. They shared their call to missions by video, because they were in Augusta, Georgia, for the IMB Sending Celebration on Nov. 13.

Tiffany Ford, who recently completed a term with IMB’s Journeyman program, shared her missions testimony. She will return to West Africa as a career missionary next year.

Happy Valley Baptist Church in Glendale is the sending church for all three, and their pastor, Chris Boggus, led the commissioning prayer.

After praying for the three missionaries, he concluded by asking God to “ignite a passion for the nations in Arizona. … that we would take the Gospel where Christ is not named or known … that [God] would raise up missionaries from every congregation in our convention, that we flood the IMB with people who are eager to go all over the world, for your glory, Lord, for the good of your people who don’t yet know you.” 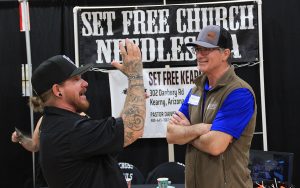 Messengers adopted a 2023 budget that increases Arizona Southern Baptists’ giving to the Southern Baptist Convention through the Cooperative Program for the ninth consecutive year, reaching a 40-60 split between the SBC and Arizona, respectively. 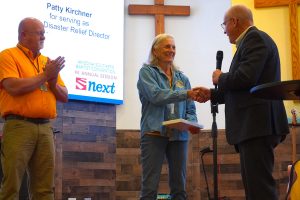 –a total of 464 churches, down from 472 in 2020, due in part to five church mergers and the withdrawal of five churches from the SBC;

–7 new churches planted and 4 others affiliating with the Arizona Southern Baptist Mission Network;

–Cooperative Program giving for the first nine months of 2022 that is $127,162 higher than the previous year.

“Thank you for your continued sacrificial and generous giving to missions through the Cooperative Program,” Johnson said. “We’re not raising money for a convention. We’re giving together for missions. We’re trying to send missionaries, plant churches, educate and train seminary students for future ministry and missions. All of this is about missions.”

Despite divisions and disagreements about issues in the SBC, Johnson challenged Arizona Southern Baptists to not be “distracted or divided or deterred from the mission God has given to us. My plea to you today is let’s stay focused on our mission. Our mission is working together to make disciples of all peoples in Arizona and around the world. And God help us if we let these issues keep us from moving forward with our mission.”

Johnson recognized the service of several Arizona Southern Baptists, including:

–Louis Spears and Fernando Amaro, who both retired as NAMB church planting catalysts earlier this year after a combined 60 years of service through NAMB;

–Don Vickers, the new state director of Disaster Relief, who was given a white cap and hard hat in recognition of his new role; and

–Keith and Terri Durham, Arizona Southern Baptists’ church health facilitator and social media strategist, respectively. Keith has accepted the call to serve as director of missions for Concho Valley Baptist Association in San Angelo, Texas. Johnson presented the Durhams with a canvas print of a photo of the Grand Canyon. 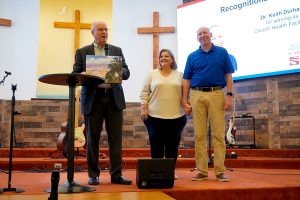 David Johnson presents a canvas print of photo of the Grand Canyon to Terri and Keith Durham. Keith has accepted a position as director of missions for an association in Texas.

Without discussion, messengers voted to receive a written report from a task force charged with determining whether the North American Mission Board is including critical race theory in its church planter training. The task force was formed after a motion was referred to the Convention Council at last year’s annual meeting.
The five-member task force, with Paul Smith as chairman, concluded: “NAMB is not including CRT in its Send Network training materials. A single employee in a series of emails emphasized racial and social justice issues but he is no longer employed by NAMB. The issue is currently non-existent, although it could rise again – as could many issues. It is our estimation that in such an instance it would likely be at the instigation of an employee, not NAMB’s official position or training.”

The meeting concluded with a brief update and challenge from Jeff Iorg, president of Gateway Seminary.

Referring to the meeting’s theme of “Next” and using Revelation 3 as his text, Iorg noted that the qualities of a church that has the capacity to go through open doors of opportunity are reflected in the church at Philadelphia. They worked hard, stayed humble, believed the Bible and talked about Jesus.

“If you do those things, Jesus said, … I will open doors of opportunity and you will actually have a ‘next,’” Iorg said in his sermon on “Getting to the Future.”

Next year’s annual meeting will be Nov. 3 at First Baptist Church in Chandler in conjunction with two IMB events. IMB will hold a Reaching the Nations Summit for lead pastors, missions pastors and church leaders on Nov. 2, and REV7:9 for 18- to 25-year-olds will follow on Nov. 4.

Elizabeth Young is director of communications for the Arizona Southern Baptist Mission Network.