Helping a pastor’s family in a time of crisis 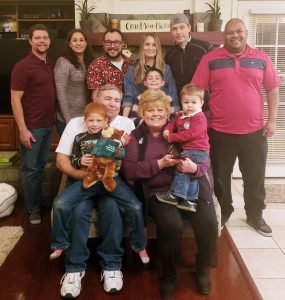 The Marquez family experienced the loss of father and husband Gary Marquez (seated) in July 2020. Andrew Marquez (far left) says a gift to the family from Arizona Southern Baptists’ Ministers in Crisis Fund was appreciated.

When churches around the state collect the Arizona Mission Offering in September, they’ll be directly helping ministry families going through hard times — families such as the Marquez family.

The day before — a Sunday — Andrew Marquez, Gary’s son and the executive pastor of North Swan, preached an online sermon from his office. In the days to come, he would navigate both the grief of losing his father and the pressure of leading a church through the pandemic.

Through the Ministers in Crisis Fund, the family received both financial and moral support, choosing to pass the money along to Andrew Marquez’s mother and Pastor Gary’s wife, Dianna.

“A crisis comes with multiple pressure points, and a fund like this helps alleviate one of those pressure points — finances,” Andrew Marquez said. “We were blessed that that was not our primary issue, but knowing that there is a little bit of support there helps a church address some of the other pressure points. And when you have limited resources in terms of time and energy and focus, that’s valuable.”

The Ministers in Crisis Fund is financed by the Arizona Mission Offering, with $25,000 allocated toward it, said David Johnson, executive director of the Arizona Southern Baptist Convention.

“It was just this idea to have some funds set aside for pastors when they encounter a crisis like losing a loved one — especially out of state — or have a health-related crisis or perhaps a financial crisis,” Johnson said.

It also indirectly helps churches that, due to limited resources, are unable to provide the kind of financial support a pastor in crisis may need, Johnson said.

Last year, because of COVID-19, the Arizona Mission Offering went entirely toward helping churches survive the pandemic, which would have left the Ministers in Crisis Fund largely depleted if not for a $20,000 grant from the North American Mission Board specifically for that purpose.

“That basically funded us for 2021,” Johnson said.

Beyond providing some financial relief, the Ministers in Crisis program is also a way to remind grieving or struggling families that there are other believers around the state who care for them. Johnson said he or another state convention staff member tries to deliver the checks personally and spend some time in prayer with the pastor.

“It says we care,” Johnson said. “And it’s not just the state convention as an entity, but Arizona Southern Baptists care about their pastors.”

For the Marquez family, that gesture of empathy went a long way.

“Their willingness to come down and meet with me and field questions about the church — we were shut down with the pandemic at the time, and it was an uncharted situation — their support was meaningful,” Marquez said. “And they were willing to talk with news media that did a report on my dad. All of that was a big help and a big comfort.”

It’s also a testament to Pastor Gary Marquez’s many years of faithful service in Arizona — he was pastor of North Swan for 31 years.

“His activity in the convention and [Catalina Baptist] Association kept the church tied in well, so we had support, so I could call [Director of Missions] John [Guillott] or David [Johnson],” Marquez said. “I knew where we could go.”

That support and recognition of his father’s work was even more valuable to the family than the money, he added.

One year later, North Swan Baptist Church has close to the same Sunday morning attendance it had before the pandemic, said Marquez, who has been serving in an interim role. He credits Pastor Gary for that staying power.

“I think we had a good foundation because of his tenure,” he said. “The church held together through everything.”