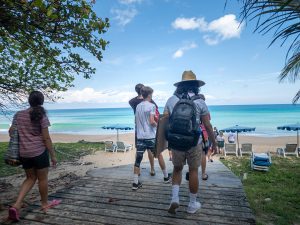 Teens of missionary parents and the mission team from Apollo Baptist Church walk to the beach for some time off during the conference. (IMB photo)

When Gary Derbyshire, senior pastor of Apollo Baptist Church in Glendale, asked his church to consider going on a mission trip to provide Bible studies and activities for teenaged TCKs (Third Culture Kids) while their missionary parents attended a conference in Thailand, he wasn’t sure who would join the team.

“As for me, working with teens whose parents serve outside the United States was something I had wanted to do for the past 12 years,” Derbyshire said.

Derbyshire is an adult TCK who grew up in Thailand, where his parents, Doug and Cheryl Derbyshire, continue to serve as IMB missionaries. With insight that only one who lived the experience can offer, Derbyshire prepared studies, sermons and activities that would speak to the needs and hearts of TCKs.

The team assembled quickly, but the manner that each team member joined was as unique as each person.

Anyone who has taken a trip outside the United States can tell you that the need for a good logistical planner is essential. Lydia Dressler, team leader, immediately felt called to be a part of this team to use her skills to help with travel, lodging, meals and finances. Her husband, Eric, was not as certain that he was supposed to go on this trip.

“I needed a passport,” Eric said. “It seemed that with all the hurdles and red tape, there was no way my passport was going to be ready in time. At this point, however, I felt the Holy Spirit say, ‘I’ll take care of the details.’”

At the last moment, a passport appointment opened, and Eric was able to get his passport.

“Every hiccup in the way just fell away,” Eric said. 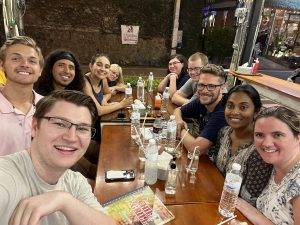 The Arizona mission team, joined by a member from North Carolina, takes a break.

Going back by going now

When Amber Robinson was 20 years old, she spent a gap year helping Doug and Cheryl Derbyshire homeschool their children so that Cheryl could be more involved in the medical ministry that was just getting off the ground. For 18 years, Robinson had wanted to go back on another mission trip, but as a young married woman with five children, the timing never seemed right.

“When Pastor Gary announced that there would be a mission trip in the summer of 2022, I heard God say, ‘Now is the time, go,’” Robinson said. “I didn’t even know what the trip was for, but I knew I was going. The fact that we would be serving TCKs felt like I was going back to where I had started by going now.”

Not too late to go

Carla Paulson had always wanted to go on a mission trip, but as a senior adult, she wondered if she would ever go.

“One night at 2 a.m., God clearly said I was going on this trip,” Paulson said.

The team quickly embraced Paulson as the “Team Mom.” The trip ended up being everything that Paulson had thought it would be. 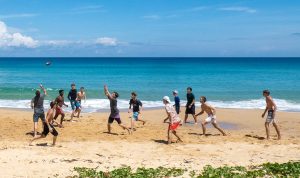 Teens of missionary parents play football on the beach in Thailand. (IMB Photo)

Often when a team serves on a mission trip, the people they are there to minister to end up encouraging the team more than expected. This team’s experience was no exception.

“Watching the TCKs come together after being apart for three years due to COVID-19 travel restrictions was so moving,” Paulson said. “The way they were hungry to worship God in English and with each other just blessed me.”