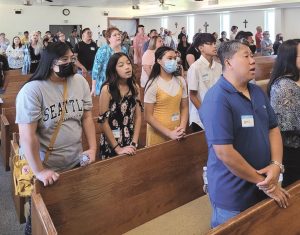 For six years, the leaders at West Glendale Baptist Church prayed for an effective way to swing the tide on their slumping attendance and reach their community. The aging Anglo congregation in west Phoenix, which resides in a mostly Hispanic community, had limited capacity to support their neighborhood. Yet, they believed God still had a future for their church.

To make matters worse, COVID-19 struck and church attendance declined by about 50%. West Glendale leaders, stretched to the limit, continued to faithfully serve, but weariness was settling in. Their hearts yearned for more effective ways to reach their corner of the city (near 67th Avenue and Bethany Home Road).

“We had also been praying for six years for a new place to meet,” said Pastor Allan Gayongala of the former Valley International Christian Church. The Filipino congregation had been meeting for many years at South Peoria Baptist Church, but the growing congregation needed more space and considered acquiring land.

Pastor Don Jones and his wife, Deb, of West Glendale Baptist, have been instrumental in connecting the two churches. Church mergers historically struggle with a failure rate of 80%, but in this case the two churches have a strong commitment to the community and a resolve to do whatever it takes to make it work. 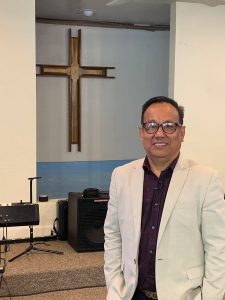 “This idea started in the summer of 2021,” Jones said. “We attended the Pastors & Wives Retreat of the Arizona Southern Baptist Convention in Tucson. My wife and I met Pastor Allan at the banquet the first night. I shared that we were looking for another church to host, and Pastor Allan told me that their growing church was looking for a new home. The Holy Spirit brought us together.”

The transition has not been without challenges.

“We met with some resistance in our congregation,” Gayongala said, “but we dealt with it with God’s help. There will always be resistance to change, but when people see the benefits of coming together, they change.”

The churches agreed to an elder-led leadership structure that brought the strengths of both churches together. Where ministries were duplicated, the two leaders share responsibilities. The unified church family now has a stronger children’s ministry, operating with more workers and more children. Moreover, the church has a homebound ministry and a prison ministry, to name a few.

“The merger has taken stress off the leaders,” said Deb Jones. “Before the union, our leaders weren’t getting a break, and now they have workers to come alongside them.” 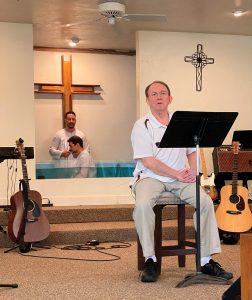 Deb Jones directs Vacation Bible School and is very excited since the former Valley International has never hosted a VBS. She is also excited about how their combined children’s ministry has grown since the merger.

“There has been a real openness in working together,” said Dan Medill, a small group leader from Valley International. “We wouldn’t have a place to worship without this opportunity.”

The pastors preach alternate Sundays. They agree it has been a humbling experience that has required faith and wisdom to blend their gifts for the greater good — honoring Christ and reaching the community.
“Coming together has brought a sense of revival for both churches,” Gayongala said. “The future is bright. This will be a long journey, but we are off to a good start!”

Easter will be a historic event for the churches to celebrate their first Resurrection Day together. What started out as separate challenges has become an inspired new beginning for both churches.