Fernando Amaro retires from NAMB, will serve as pastor and direct school 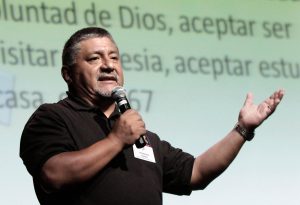 Fernando Amaro retired as a church planting catalyst with the North American Mission Board (NAMB) on April 1 and was recognized for 30 years of service.

He has, however, not retired from ministry. He will transition to senior pastor at Iglesia Bautista Resurrection, which meets at First Southern Baptist Church of Scottsdale, and continue as director of Escuela Bíblica de Liderazgo in Phoenix.

“On behalf of Arizona Southern Baptists, I would like to express our deep appreciation to Fernando for his ministry in Arizona helping plant churches, equipping and training pastors, and strengthening the work of evangelism and discipleship among our Hispanic population,” said David Johnson, executive director of the Arizona Southern Baptist Mission Network. “We are thankful that he will continue to minister in our state even after his retirement. We owe Fernando a debt of gratitude for his decades of service in Arizona.”

Amaro began his ministry in Mexico in 1979 and came to Arizona seven years later.

“I came to Arizona in 1986 with my wife and two of my kids and served as pastor and church planter from 1990 to 1999 when the Arizona Mission Board invited me to join the Arizona Southern Baptist Convention,” he said. “The two churches God planted through me are still here.”

Steve Bass, assistant to the president for convention and associational relations at the North American Mission Board and previous AZSBC executive director, said, “Fernando, to me, was the consummate ambassador between the wonderful people of Mexico and the great state of Arizona. He knew both mission fields and it was an honor to have him on our team.”

“Fernando has served Arizona Southern Baptist faithfully by planting churches and training leaders across our state,” said Monty Patton, NAMB Send Network Arizona director. “I’m thankful for the legacy that he is leaving and the work that will continue on for years because of the seeds that this faithful servant has planted.”

Some of the training of leaders has occurred through Escuela Bíblica de Liderazgo, and this ministry will continue.

“I have always had a passion to teach, and in 1988, the Arizona Southern Baptist Convention allowed me to open [what became today’s] Escuela Bíblica de Liderazgo for Spanish speakers,” Amaro said. “It was founded in relationship with NAMB and Golden Gate Baptist Theological Seminary. It came under the full support of Arizona Southern Baptist Convention in 2005. We are currently planning classes online to give us the opportunity to reach every corner of Arizona.”

When Amaro came to Arizona, he had a plan: Come, study and go back to Mexico to teach. God had a different plan.

“He put me here because I come from the same country, I speak the same language, I understand the culture and I needed to share Christ with my people in this country,” Amaro said. “To me, it was finding God’s will to spend my life in a place for His glory and the benefit of these people.”

The decision to stay in Arizona was not easy, though.

“My fight itself was pride,” Amaro said. “Through the years, God has shown me that being humble and obedient is everything. In the beginning, I was fighting hard because I wanted to be big, well known, with fame. I finally surrendered to His will and said, ‘OK, [if] you really want me to be a simple pastor of a little Hispanic church, that’s what I want to do.’”

That’s when God opened the door for Amaro and his wife, Mirsa, to travel around the country teaching Lifeway’s curriculum for Vacation Bible School, Sunday School and discipleship in Spanish.

“I was so happy because God told me, ‘You see, with Me, if you obey Me, I can do whatever I need to do with your life, in any place I want,’” Amaro said. “That has been my main lesson — not only to be committed to Him but to be submitted to Him.”

Amaro says the second best thing after his salvation is Mirsa. She has been there in rough times, in happy times, in illness, in everything, loving God first and him second. They will celebrate 41 years of marriage in December.

Mirsa spent the past 28 years serving Hispanic women throughout the state. She is currently the Hispanic women’s state leader and the state WMU Hispanic consultant.

While continuing in ministry, Amaro also plans to enjoy lots of time with Mirsa and as grandfather to their 11 grandchildren.