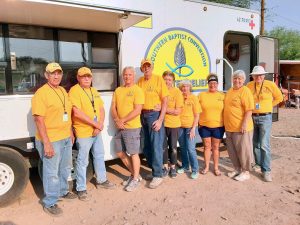 Human suffering comes in many disturbing ways: fires, floods, displacement, hunger, homelessness. Its consequences affect the general population as well as the people who serve in times of disaster.

Arizona Southern Baptist Disaster Relief is enhancing the ways it prepares to serve in times of crisis. Leaders are doing it through expanded training and collaboration.

A regional approach to training has led to more volunteers being trained.

In February 2020, the annual statewide training was held in Gilbert. Based on a successful training event in Yuma, smaller events have been held this year in Lake Havasu City and Casa Grande. Eighty volunteers were trained in these regional events compared to the average of 45 to 50 in an annual event.

A volunteer application form and the basic training module “Involving Southern Baptists in Disaster Relief” are available at azsbc.org/disaster-relief/.

In April, an Arizona Southern Baptist Disaster Relief feeding unit was a partner during the Margo Fire in Dudleyville.

Donations of $4,000 from Southwest Gas and $4,000 from the Episcopal Diocese covered the cost of meals.

“Team Rubicon finished their work four days early,” Kirchner said. “We had plenty of food left over, most of it in a Shamrock refrigerated trailer.”

Kirchner worked with Pinal County Emergency Management, which made arrangements with the food bank in Superior to pick up the food. Ultimately, the leftover food purchased with that $8,000 was distributed to people in Top of the World, Superior, Miami, Claypool, Globe and El Capitan.

“Those funds went a lot further than just helping the people in Dudleyville,” Kirchner said. “It helped people in Pinal and Gila County during the Telegraph Fire. God’s hand was in all of that. That’s the beauty of working in VOAD. We accomplish more when we work together than any of us could do alone.” 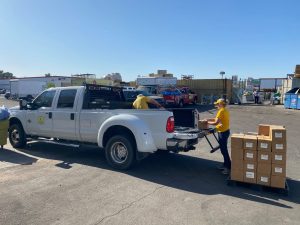 Deployments for Arizona Southern Baptist Disaster Relief in 2021 have been limited so far.

Volunteers did assessments and chainsaw jobs in Granby, Colorado, following up after last summer’s East Troublesome Fire. Arizona ash-out teams are scheduled to return in July and August.

Teams were placed on alert for the Backbone, Wyrick, Rafael and Telegraph fires in Arizona but were not deployed

In addition to sending volunteers, Arizona Southern Baptist Disaster Relief has also deployed equipment this year. The shower unit was sent to Rifle, Colorado, for use by a Southern Baptist mission team and to Dudleyville, along with the feeding unit.

“God is faithful,” Kirchner said. “We saw the Lord working through all of this. We don’t always work with Christian-based organizations but we do get to live our lives before them.”