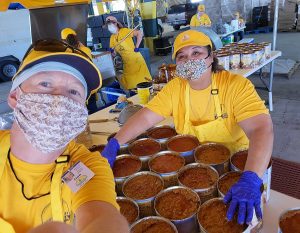 Arizona Southern Baptist Disaster Relief teams are bringing hope and comfort to flood and hurricane victims in Arizona and Louisiana.
Twenty-three volunteers, including a chaplain, ministered to flood victims in Gila Bend August 17-26. In those 10 days, they assessed 25 homes, removed mud, drywall, flooring, appliances, cabinets and furniture from 11 of them and assisted United Methodists’ disaster relief ministry (UMCOR) in processing two other homes.

“For many, everything they owned went out to the street for [trash] pickup,” said Patty Kirchner, Arizona Southern Baptist Disaster Relief state director. 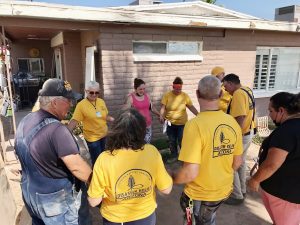 On Sunday, September 12, part of the Arizona team began managing a site in Houma, Louisiana, replacing the Kentucky Southern Baptist Disaster Relief team, which was diverted to Pennsylvania and New York to deal with hurricane damage there. Arizona volunteers are working in flood recovery, chain saw, roof tarping and feeding in Houma. 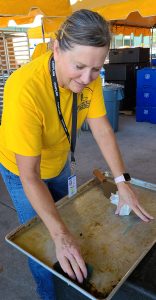 “We are leaving half our feeding team with the Salvation Army feeding unit [in Gonzales] and bringing the other half to Houma to feed the teams,” she said. The Arizona team is receiving help from Disaster Relief volunteers from New Mexico and Colorado.

“We would really benefit from having a refrigerated box truck,” Kirchner said.
Kirchner is hoping for more volunteers for chain saw and feeding teams, as recovery will last quite a while and people are needed to replace the current team members. COVID-19 is decimating some of the teams from other states, she said. Many states are having trouble enlisting teams because of the pandemic. Two states recalled teams because members tested positive, she said.

“We need lots of prayer,” Kirchner said. “I know God is able. He is the God of creation. He has it all. There is just a lot of need. It’s kind of like trying to manage a circus; there are so many things going on at once. Please pray for the teams. It is really bad here.
“God’s got a plan,” she said. “We’ve been seeing that all week.”