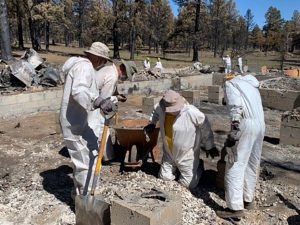 Arizona Southern Baptist Disaster Relief Teams spent the last two weeks of May sifting through the ash and rubble of obliterated homes to recover precious belongings claimed by the Tunnel Fire.

The Coconino County Sheriff’s Office reported that 30 homes near Flagstaff were burned in the fire that was initially reported on April 17.

Dave and Norma Turner performed most of the assessments May 12-16. The first ash-out recovery team started work May 16, and a second team began May 23. As of May 27, 11 DR volunteers were still on site.

The teams worked on properties whose owners had requested help sifting through debris. 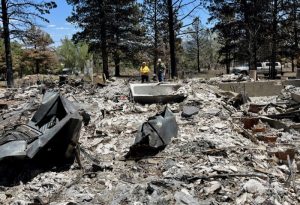 “We have completed eight properties and will return to finish another,” Kirchner said. “Team Rubicon should arrive around June 9 with a saw big enough to cut through rebar and block at that property. We’ll return with a small team, supervise the removal of block and begin sifting for personal belongings.”

Some of the homeowners were with the teams at one time or another during the cleanup to tell the DR volunteers what to look for and where it might be located, she said.

Anything the team finds is returned to the homeowners. The teams find just about anything including coins, jewelry and mementos.

Homeowners at one site had quite a bit of jewelry with gemstones, and the volunteers wanted to take their time and sift it very carefully.

“We filled a trash can with the ash from the area they showed us, put a lid on it and gave it to them,” Kirchner said.

Two volunteers left after testing positive for Covid on the May 26. The rest of the team tested negative.

Rocks had to be separated by hand from debris that was being dragged to the dumpster. Rocks and construction block in the container made it too heavy for the trucks to pick up. 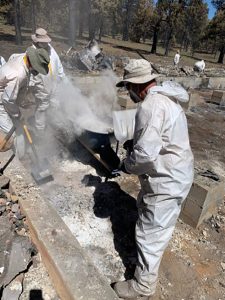 “First Southern Baptist Church of Flagstaff has hosted us,” Kirchner said. “Our feeding team is cooking in their kitchen, allowing us the opportunity to fellowship with the pastor (Jim Maynard) during meals.”

“Coconino County has really done a great job making sure we have the roll-off dumpsters,” she said. “They have really come alongside these homeowners. Ray Garcia, Coconino County public works, is managing this recovery effort and is frequently on site. It’s been super working with them.”

All ash-out projects are not equal. Although it’s easy to think about “value” in terms of money, sometimes it’s so much more. In a Colorado deployment, a family was made whole again when the urn of their infant daughter was found in a partially collapsed basement.