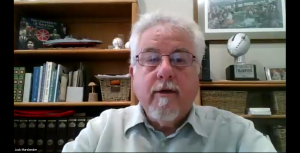 As part of the 2023 budget, the Cooperative Program distribution plan will be presented to messengers for approval at the annual meeting in November. The plan calls for an increase of one percentage point to the Southern Baptist Convention for national and international missions and ministries, bringing the total sent beyond Arizona to 40%.

This will mark another step toward fulfilling the Centennial Vision goal of giving 50% of Cooperative Program receipts to missions outside the state through the SBC by 2028. It will be the ninth consecutive annual increase, resulting in a total rise of 14 percentage points.

The remaining 60% will be divided as follows: Arizona Southern Baptist Convention, 46.9%, a decrease of 1%; Arizona Baptist Children’s Services, 7%; and the Arizona Campus of Gateway Seminary, 6.1%. The percentages for ABCS and Gateway are unchanged from 2022. The percentage for Gateway is actually 7%, less anticipated expenses incurred by the AZSBC for the Arizona Campus.

Following the recommendations of the Executive Team, which met with the respective pastors, the council approved three churches for affiliation: Mosaic Church in Wickenburg; Citadel of Praise Christian Church, which meets in Peoria and Buckeye; and Iglesia Expandiendo el Reino de Dios in Laveen. Iglesia Expandiendo was approved pending the church’s affirmation of the Baptist Faith and Message after reviewing it in Spanish with Josue Castro, Arizona Southern Baptist Mission Network Hispanic ministries facilitator.

“In this season when we’ve had a lot of discussion about things happening in the Southern Baptist Convention and there’s a bit of rancor out there, it’s been encouraging to me to see three churches that want to join us,” Executive Director David Johnson said. “So, while there are people that are upset about things, how refreshing it is to know that people want to join us because the see the mission that we’re involved in and they want to be a part that!”

In other action, the council approved the first quarter financial report, which showed Cooperative Program gifts of $1,000,096.28 for the first three months of the year.

“That is a significant landmark for us,” Johnson said.

However, Johnson noted March Cooperative Program giving, as well as April giving, which was not included in the report, were both lower than the previous year.

“That’s giving me a little bit of pause about the trend that we’re seeing,” he said. “We are going to have to wait to see how this plays out the rest of this year. … The giving going down in March and April makes me think that our churches are starting to feel the pinch a little bit of inflation and increased cost for things.”

Even with the decrease, though, Cooperative Program giving is “way ahead of our budgeted amount,” he said.

Kyle Rosas and Sterling Edwards — are now serving in Arizona, he said.

“We’re continuing to emphasize a next step strategy in our network, challenging churches/associations to think about ‘What is your next step to accomplish the mission that God has given to you?’” Johnson said. All of the associational mission strategists met in April to talk about how the associations and Arizona Mission Network can work together on this.

“We’d like to all be speaking the same language and all on the same channel,” Johnson said.

The meeting was led by Don Vickers, associational mission strategist in Yuma Association, which has already adopted this strategy, and Tom Burks, pastor of Stone Ridge Church in Yuma.

Johnson updated the council on action related to a motion at the 2021 annual meeting that called for an investigation of whether the North American Mission Board is teaching critical race theory in their church planting orientation. Jack Marslender, Arizona Southern Baptist Mission Network president, has appointed a team that is at work and will report to the Convention Council later this year, Johnson said.