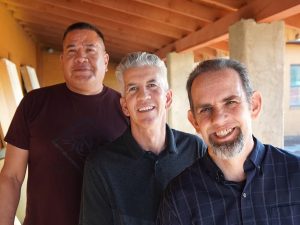 Through asbestos and a leaky roof on an old church building, Winslow church planter Randy Therio has seen God at work.

Although it hasn’t launched yet, Multiply Church and Training Center has already received support from churches around the state as Therio restores a Winslow building that once housed First Indian Baptist Church.

“When you’re part of a larger network, you get to see the body of Christ work in such a tangible way,” Therio said. “The only words for it are overwhelming blessing.”

Therio is new to the denomination, becoming a North American Mission Board (NAMB) church planter last year after feeling led to serve Native American communities. He and his wife, Deana, moved to Winslow from Buckeye after Therio spent 16 years as an associate and worship pastor at a nondenominational church.

“Coming from a nondenominational scenario, it was the head pastor and I …,” Therio said. “That has been one of the greatest things I have needed to learn, to ask for help.”

And help has been abundant.

After discovering asbestos in the old building, Therio received a $20,000 grant to help with asbestos abatement from the Arizona Southern Baptist Mission Network through the Arizona Mission Offering. His previous church, Crossings Church, along with Grand Community Baptist Church in Surprise funded repairs for the roof. First Baptist Church Garden Lakes in Avondale donated 255 chairs. Cross Church in Phoenix provided a sound system. First Southern Baptist Church of Buckeye has contributed labor and materials for restrooms.

“God is amazing, and in the future, that’s one of those things that’s going to be confirmation for us when we look back [during times that] it’s hard,” Therio said. “We can say that God provided all of these blessings, and He continues to provide things I didn’t even know to ask for.” 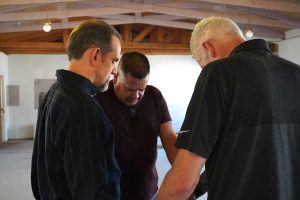 In the midst of remodeling at Multiply Church and Training Center in Winslow, Fred Harris (left) and Owen Chevarillo (right) pray with Randy Therio.

Therio ended up in Winslow after visiting a home that cares for Native American children in northern Arizona. When he learned that those children attended First Baptist Church in Winslow on Sundays, he cold-called the senior pastor, Fred Harris, to see if the church needed any help. Harris then connected him with Tommy Thomas, a now-retired NAMB church planting catalyst. Therio said it was Thomas who told him about an empty church building with training center potential.

“Truthfully, this was a God thing that just dropped out of the sky,” said Harris — First Baptist, Winslow, became the sending church. “We weren’t having church council meetings saying, ‘We need to come up with something to reach out to the reservation.’ But we were actively looking for next steps, so our hearts and ears were open.”

Because of Winslow’s proximity to the Navajo Nation and Hopi Tribe, Therio plans to use his new space to start a multicultural church and also mentor and equip Native American pastors and leaders as they serve within their own communities.

Even as renovations on the building continue, Therio is already connecting with area pastors such as Owen Chevarillo, the bivocational senior pastor at Cornfields Community Baptist Church, who stepped into the role about a year ago.

“My heart was for the Navajo people out there on the reservation,” Chevarillo said. “They need the Gospel and it’s just my heart to do that. … I was praying and wanted somebody to help me with this walk, and then God brought Randy into my life.” 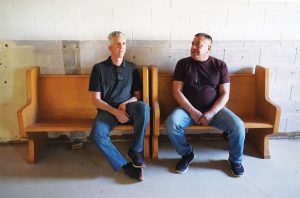 Randy Therio (left) and Owen Chevarillo visit inside the church building that is being remodeled.

Now, the two pastors are learning from and encouraging each other.

“The joy is building a platform for someone else to stand on,” Therio said. “That’s the joy. That’s what Multiply Church is about and that’s what the kingdom is about.”