Connecting with parents through children’s soccer 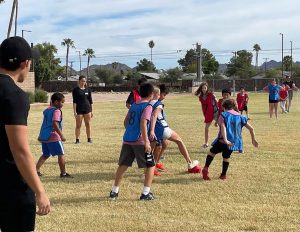 For Royal Palms Baptist Church in Phoenix, evangelistic outreach is no longer about how many people can be drawn onto campus for a large community event. Instead, Royal Palms is attempting to build lasting relationships with families through a children’s soccer program at the church.

“We’ve been trying to figure out how to reach this community for a long time,” Royal Palms Pastor Ben Pate said.

In one of his first years as pastor there, the church held a harvest festival attended by more than 1,000 people. However, after putting a lot of work into the event, Pate realized at the end, “We didn’t really have meaningful conversations with anybody.”

Last year, church leaders asked administrators at the neighborhood elementary school — with which the church has an ongoing relationship — what would be helpful to the community. The answer was sports, said Jackie Fry, Royal Palms’ children’s minister.

With a large grass field on the church property, “soccer has kind of always been in the back of our minds,” said Pate, who played a little soccer in high school. “Eventually, we just felt the urgency to say, ‘Let’s just try to offer something. Let’s just pull the trigger and … see if we can begin to reach these kids and actually have time where we can know their names, know the parents and begin to reach them in a way that we have never been able to before.’”

From the beginning, God has provided for the ministry.

Royal Palms connected with Haven Church, a Nazarene church in Glendale that has a soccer ministry. Church members there helped line three soccer fields at Royal Palms, told them about the setup and gave advice on what equipment to buy. 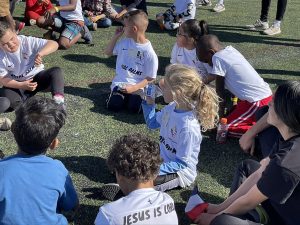 Last spring, with the help of church member Joy French, a retired elementary school P.E. teacher who recruited some of her retired P.E. teacher friends to help, Royal Palms conducted a successful four-night soccer camp for children in kindergarten through 6th grade.

Help for the camp also came from another direction.

Pate, an adjunct professor at Grand Canyon University, contacted Bryson Isom, pastor of Relentless Church, a Southern Baptist church that meets near Grand Canyon and that Royal Palms helps support. Isom sent a church member — a former student of Pate’s who had played soccer in high school — to help.

In the fall, Royal Palms started Super Star Soccer on specific Saturdays at the church.

The Relentless Church member wasn’t available to help, but he recommended a friend at Grand Canyon who had a soccer ministry. Cristian Gomez is a product of Cosdecol, an evangelical soccer ministry in Colombia. He plays on a club team at Grand Canyon and started a Cosdecol USA ministry that has been officially recognized by GCU.

Gomez offered to help and bring along some friends. The first week, about eight college students showed up. Since then, about 12 male and female GCU students have been coming.

Royal Palms turned over the game part of the soccer program to the students, freeing church members to set up, conduct registration, provide snacks, and, most importantly, make friends with parents at the games. After Pate initially giving the devotional and sharing the Gospel during the break after the opening games, now the GCU students are being trained by Cosdecol to do this.

“In spring, the partnership really took off, with us being the host and them [bringing] the skills and energy,” Pate said. “We actually get to hang out with moms and dads … and build relationships with them, so it’s been incredible. That’s from the Lord, because really He’s just bringing the people here.”

“[They] were an answer to our prayer,” she said. “We couldn’t believe how God honored this little bit of effort that we had and multiplied it by bringing these college [students]. They love the kids and the kids love them. It’s just been a beautiful, beautiful partnership with them.”

Less than a quarter of the children are from Royal Palms. “The majority are kids that we’ve never seen before, parents we’ve never connected with before,” Pate said. 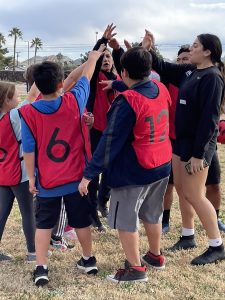 He pointed to what he has learned from Dennis Pethers about pre-evangelism and starting by letting people know you care about them. Pethers is founder of The Rooftop, an international ministry inviting believers to join Jesus in His ministry. He has worked with a number of Arizona Southern Baptist churches.

“It’s a very, very slow process, but it’s very rewarding,” Pate said. “We’re playing the long game here in the sense of really just doing the tilling of the soil.”

While the Gospel is shared with the children at each session, “with the parents it’s a slow process of just continuing to invest in them and trying to build relationships with them, because we’ve never had that before in our community,” he said.

At first, the parents were guarded with the Royal Palms members, but “they little by little started sharing … their lives,” French said. “They talk about their struggles with their kids and the problems they’re facing at work, and it’s been such an amazing blessing.”

The new relationships are growing.

One family asked Royal Palms to help start a soccer ministry at their Hispanic Southern Baptist church not far away.

“How exciting is that, just to be a part of another church and to help this ministry grow beyond what’s happening at our own church?” French said. “That’s all God just using us.”

And throughout all of this, the prayer is the same.

“We’re praying we’ll see the harvest from this,” Fry said. “There are parents coming you can tell are hurting, and they’ve had a hard life. They are allowing us to influence their children with a hope that they probably don’t understand at all. If someone doesn’t have anything to pray about, pray about that.”