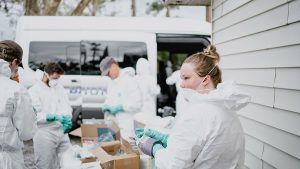 The 10 students gathered around the two men in bright yellow shirts just outside of Bethel Baptist Church in Bourg, Louisiana, listening as they were told about safety protocols, how this was going to work and why they were here.

The students were from the Baptist Student Union at Hinds Community College in Raymond, Mississippi, and they went to south Louisiana for a long weekend to serve with Southern Baptist Disaster Relief teams following the destruction of Hurricane Ida.

Bethel Baptist had large amounts of water damage, and the students were being instructed by two Disaster Relief veterans, one from California and one from Arizona.

“We want you to treat this like it’s your home,” said Rob Bline of California Southern Baptist Disaster Relief Ministries. “It’s not just a job, it’s not just wet drywall … it’s somebody’s home (of worship), and we need to treat it as such.” 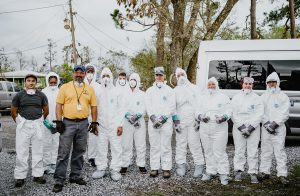 Dave Turner of Arizona Southern Baptist Disaster Relief explained that losses of possessions and places of community are a large source of grief for homeowners and parishioners.

“Losing something like this church can be like losing a family member, and you’re sharing the love of Jesus with your actions,” Turner said.

Bline prayed over the group prior to starting the cleanup process, asking the Lord to “restore and renew” the church so that it can continue to be “used for His glory.”

From there, the students donned their safety gear and got to work.

Turner’s wife, Norma, who serves as the team chaplain for this location, has worked with similar college groups through Disaster Relief in the past.

“They always do great work,” she said. “They want to come. They want to serve, and they just put their heart into it.

They’re “awesome to work with,” she added.