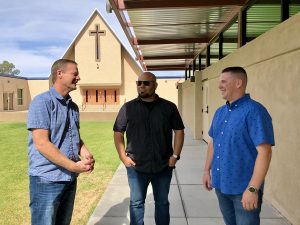 As church planter Brandon Barrios prepares to launch Way Family Church in southeast Tucson this fall, he has a whole team of local pastors behind him.

Barrios is part of Tucson’s new, yearlong residency through Send Network, the church planting arm of the North American Mission Board.

This model of residency is new to the state, drawing on the wisdom of multiple local pastors, rather than the usual reliance on expertise from just one church, said Monty Patton, Send Network Arizona director.

For Barrios — the first church planter to go through this residency — this means he has a team of local pastors dedicated to his church’s success.

“We have started churches in Tucson before, and the guy (pastor) has kind of been on an island,” Patton said. “We don’t want to do that anymore. We want to make sure he not only gets enough training but also the support of Tucson pastors.”

Throughout his residency, Barrios met monthly with Patton and a group of five Tucson-area pastors with involvement in church planting — Ashley Evans of 22nd Street Baptist Church, John Guillott of Green Valley Baptist Church, Brian Hook of Aspire Church, David Taylor of Common Ground Church and Jeff Vanderford of Authentic Life Church. Together, they have coached Barrios through everything from setting up church systems to building community partnerships.

Brandon Barrios preaches at Way Family Church, which meets at a middle school in southeast Tucson.

“I had the resources I needed to learn and get things done …” Barrios said. “I am blessed by it and the people the Lord has sent us.”

The residency cohort, which accompanied other NAMB training Barrios received, gave him an opportunity to learn about a specific area of ministry each month, gleaning from those with strengths in each area.

“Then at the end of the month, I would have to report what I learned and how I exercised it in practice,” Barrios said, who is now a lead pastor for the first time.

Barrios has prior ministry experience as a student and worship pastor in Bakersfield, California, and in another ministry role when his family moved to Tucson several years ago. He was not previously part of the Southern Baptist Convention, but the calling to plant a church connected him with Vanderford, who introduced him to the North American Mission Board, and Taylor, whose church, Common Ground, became Barrios’ sending church and his employer for a year as Way Family Church grew.

“I am grateful for the partnerships we had in Tucson when we came here, but I wish I had something like this when we planted (Authentic Life),” said Vanderford, the church planting specialist for the Catalina Baptist Association. “Tucson is a very hard place to plant.” 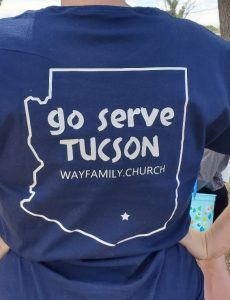 Way Family Church in Tucson will launch publicly this fall.

After meeting for more than a year, Way Family Church now has about 50 people gathering at Lauffer Middle School on Sundays, Barrios said.

“We’re trying to put together a residency that has Tucson in mind, particularly for someone who comes from outside the city …” Taylor said. “The aspect of having guys who understand and are doing church in Tucson to help walk a new planter though this different culture is a big deal.”

With Barrios’ residency complete, he’ll stay on the team to continue learning and to share his experience with the next church planters. The team is also putting together curriculum, and, Patton said, he prays this model can be replicated across the state.

“I really do feel like there is a heart for multiplication here, where we’re really kingdom-minded, and I love it,” Barrios said. “I’m so blessed to be part of it.”