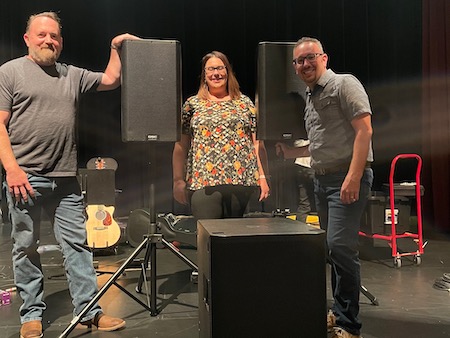 Striving to plant a healthy church in a given year is nerve-wracking enough with obstacles ranging from apathy, opposition, financial stress to discouragement.

Planting a healthy church during COVID-19 is an even more difficult proposal to fulfill — when so many people have been reluctant to connect and so many schools have closed their doors, restricting facilities usage.

For Andrew Puett, planter of Redemption Road Church in Waddell, the task grew much rougher last year when a night-time thief stole church sound equipment out of his front yard.

After being temporarily displaced by their school for worship services during the pandemic, the church was meeting for their first Sunday back together as a group in June 2020.

On the way to church that Sunday, Andrew hitched up his church’s equipment trailer at home and headed to church. Terry Puett, his father, pulled him over to say the door on the storage trailer he was pulling was swinging open.

A worship storage trailer is LIFE for a church planting team, as the sound equipment and speakers create an opportunity to set up worship from scratch and build community every Sunday.

Going over to inspect the door, Andrew discovered someone had gone into his yard, cut the bracket of the lock and stolen the bulk of the church’s equipment. Missing items included a keyboard, soundboard, brand new screen (received just a few days earlier), drums, microphones, mic stands and much more.

“You always think that will never happen to you,” Puett said, “but then you become a target. … We had a range of emotions, but, surprisingly, we were pretty calm about it.

“By the time the worship team got there that Sunday, we banded together to pray. Thankfully, another church planter brought some equipment and bailed us out.”

What was the result of the theft? The church took a big hit financially and really felt the blow.

Good news, though. A new family came to connect with the church after hearing about the break-in. They were motivated to help.

Meanwhile, Jere Martynotte, pastor of The Shepherd’s Gate Community Church SBC in Sun City, was experiencing major health problems and the church was feeling the devastation of the pandemic. The church had done a superb work over the years managing significant key resources.

“We had funds, but we were in a tough position, facing closing down,” Martynotte said.

The question on the table: “How can we reach more people?”

After meeting with key leaders, Shepherd’s Gate Community Church presented Redemption Road with a check for $20,000.

“Our goal was reaching more people,” Martynotte said. “We were glad to do it.”

The benefits for Redemption Road Church have been substantial. The church was able to acquire a quality new sound system, a new screen and replace the equipment that was stolen.

“We were also able to do more outreach than we planned, based upon the gift,” Puett said.

The new family who joined because of the break-in became one of the most committed families to the church.

The network of Arizona churches also benefited by seeing churches unite for the sake of the gospel.

“When you’re involved in a network, churches can help one another to build the kingdom,” Johnson said. “Almost every church I know has a desire to network and to help. This is a matter of churches taking initiative to assess their strengths and gifts and invest where there are opportunities.”

Despite the adversity, Redemption Road Church continues to see fruitful work of the Spirit in bringing hearts closer to Christ.