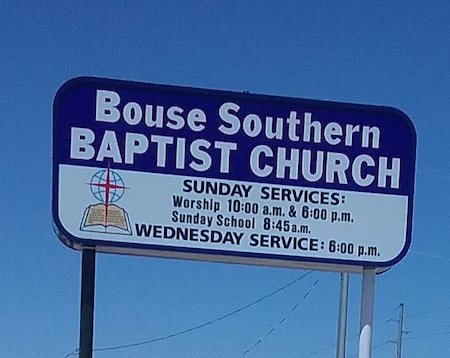 With the help of a giving challenge, a small church in western Arizona gave more than 16 times its goal to the Annie Armstrong Easter Offering for North American Missions.

Bouse Southern Baptist Church, which has a weekly worship attendance of 45, set a goal of $350 for the offering. The church agreed to match from existing funds the total given by members.

“Believing that the amount would probably be around the same as previous years, there was no concern for matching the offerings,” said Pastor Ted Finkbeiner. “However, God gave us a surprise.”

“That means our total gifts to the Annie Armstrong Offering will be close to $6,000.” Finkbeiner said. “Be careful what you ask for, as God might decide to challenge your commitment!”

The church is rejoicing to see how God worked.

“We give God the glory for using our small congregation to fund missions throughout the United States,” Finkbeiner said.

Set Free in Desert Center, California, needed about 17 doors throughout the church’s facility. Bouse gave an offering of $4,008 to Set Free for the doors. In addition, Quartzsite Southern Baptist Church in Quartzsite gave $3,500 for the project. All three churches are part of the River Valley Mission Network.

Arizona Southern Baptist Convention Business Administrator Kathy Keller reported on May 7 that the Annie Armstrong Offering is “still coming in strong” as churches send their gifts to the state convention for forwarding to the North American Mission Board. At that time, $74,535 more had been received than in the same time period last year.