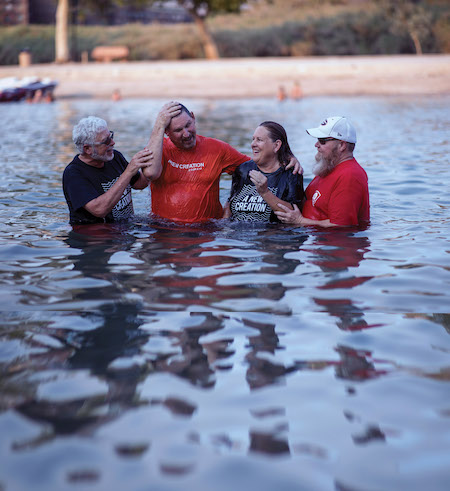 Tom Brown, 88, chose to be baptized at Calvary Baptist Church in 2020 despite mobility issues and trouble breathing.

Travis Johnson, 30, chose to be baptized in 2020 despite good health, having a good wife and job, and a life unchurched people might say didn’t need God.

Zayah Loya, 9, chose to be baptized in 2020, along with 13 other 4th graders, and their teacher at the church’s K-8 school, Calvary Christian Academy, and two strangers who heard the message of God’s love proclaimed on the shores of Lake Havasu.

These are some of the 236 baptisms at Calvary, Lake Havasu City, during 2020, a record for the church that has baptized about 150 people each year for the last six years. That total includes 22 from Calvary’s church plant in Parker, 30 miles south, which started in 2019.

“The mission of Christ doesn’t get shut down,” Senior Pastor Chad Garrison says. “It doesn’t mean the power of God is any less, even though the church building is shut down.”

Church leaders realized about four weeks into the shutdown the number of people wanting to be baptized was more than usual. Garrison attributed the number to a snowball effect that started with God’s blessing, church services including baptisms being livestreamed, and leaders calling church members to keep a close connection with Calvary.

“We told people even though we stopped meeting on the physical campus in March, if you want to be baptized during the week, if you want to profess Jesus publicly, we’ll do it anywhere there’s water and witnesses,” Garrison says.

Intentionality is a hallmark of Calvary’s missional strategy.

“We make the mission of Christ the most important thing we do,” Garrison says. “We make decisions and spend money to reach people with the gospel. It has to be the priority.”

When church leaders called members during the shutdown to maintain the church’s connection with them, they asked about their spiritual health and prayed with them. If they indicated a desire to be baptized, they were asked, “When?”

Calvary Havasu usually hosts a summer baptism in the lake. In 2020, 47 were baptized that day.

“Someone who missed it asked if we could do another,” Garrison says. “When we did, we baptized another 20 or so. When we met again in the fall, we were preaching through Acts, and we did a call for spontaneous baptisms. It was the weekend we were talking about Philip meeting the Ethiopian, and another 37 people responded.

“The [number of] baptisms resulted from a combination of us leaning into our ongoing focus on mission and making it convenient for people to follow through with their desire to be baptized,” the pastor says.

Both Havasu and Parker campuses major on being out in and serving the community as ways to remind people of the importance of God in their lives.

“In America today, nobody is interested in what we have to say,” Garrison says. “We have to earn the right to be heard, to serve people without an agenda.” 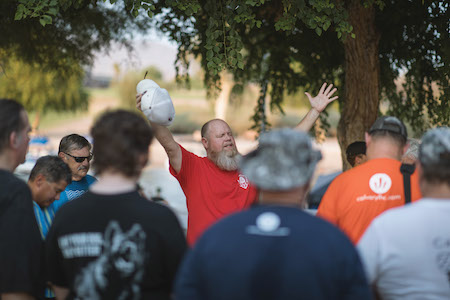 At the beginning of Calvary’s baptism service at Lake Havasu, Chet Anderson, executive pastor, prays over the candidates for baptism.

Calvary in both locations has become known because of this long-standing focus on being the church out in the community. This includes an annual car show that draws 200 or more specialized vehicles, participating in the town’s Main Street event each Halloween, a major community outreach every quarter and more frequent activities by the church’s 70 life groups.

Missions activities outside its community, such as on Arizona reservations and in Honduras and Mozambique, are additional ways Calvary spreads the message of God’s unconditional love worldwide.

So, too, is 10 percent of the church’s undesignated offerings being allocated for the Cooperative Program, Southern Baptists’ method for working together to fund missions and ministries. Calvary leads Arizona in CP giving.

“You can’t outgive God,” Garrison says. “We feel if we’re generous and if we encourage our people to be generous, God’s going to bless us as well, and He has.”

Read more about Tom Brown, Travis Johnson,
the 4th-grade class from Calvary Christian
Academy and others as they share their testimonies
Click here to read

Karen L. Willoughby is a national correspondent for Baptist Press and a freelance writer for Portraits.

—What are ways you can reach out to those in your community to help them know your church cares?

—Pray about the possibility of your church offering a public, group baptism.

—Organize groups in your church to plan and conduct special projects in the community so that people will know your church cares.

—Learn more about the Cooperative Program at azsbc.org/the-cooperative-program/.