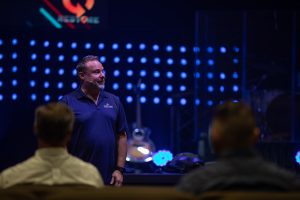 “Remember Jesus?” North Coast Pastor Chris Brown read to the crowd of pastors and church leaders gathered at Calvary Baptist Church in Lake Havasu City for the Arizona Southern Baptist Pastors’ Conference on November 12. Brown was reading in 2 Timothy and, as a master storyteller, set the likely scene of Ephesus’ young pastor Timothy.

“When Paul reminds Timothy 25 times to be strong it was likely because he was … ?” Brown paused and waited for the crowd’s response. “Weak,” they eventually answered in unison. “And if he reminds him to connect with others over and over its likely because he is … ?” “Alone,” the crowd answered again, now getting in rhythm with the call and response system being developed.

“How many of you pastors are currently or have ever felt weak and alone?” he asked. Hands were raised across the sanctuary as many confirmed a similar feeling. Brown went on to deliver a similar message of encouragement to those in the audience as Paul did for Timothy in his second letter to his son in the faith.

“Over the past year and a half, we have been culturally shot at, and our church body and us leaders have been genuinely surprised spiritual bullets are flying. Why are we surprised we are being shot at? We need to stop being surprised we find ourselves in a battle, we have always been in a spiritual battle,” Brown said.

He cited 2 Timothy 2:8-11 (CSB): “Remember Jesus Christ, risen from the dead and descended from David, according to my gospel, for which I suffer to the point of being bound like a criminal. But the word of God is not bound. This is why I endure all things for the elect: so that they also may obtain salvation, which is Christ Jesus, with eternal glory.”

Since the start of the COVID-19 pandemic, churches across the United States have experienced spiritual “shots” being fired. The message from 2 Timothy was a great reminder for leaders of the church to stay focused on the real battle surrounding us and to endure to the end for the sake of the elect so they may obtain salvation through Jesus Christ. 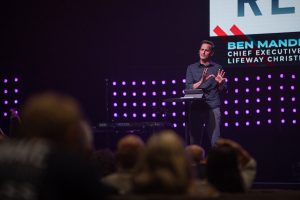 Following Brown, the conference enjoyed a brief message from Ben Mandrell, president and CEO of Lifeway Christian Resources. Though cut short due to time, he was able to encourage the audience with his message from 1 Samuel on finding your calling.

In sharing their experiences of the last year and a half of the pandemic, each speaker reminded those in attendance that the Lord has not changed and is still active in their lives. Their willingness to openly share their experiences through it all were a true encouragement to the churches present for the event.

Videos of messages from the Pastors’ Conference may be viewed at vimeo.com/showcase/9031534.