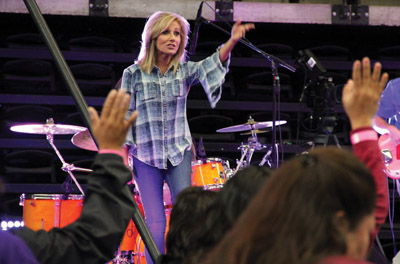 It is unusual for a well-known conference speaker to choose a remote Native American location over a city that could draw a large audience.

In Chinle, Living Proof Live with Beth Moore became more than an event.

After the initial conference was held in 2016, the Living Proof Live team worked with Arizona organizers to equip leaders to spread the gospel on the reservation.

Beth Moore and LifeWay Christian Resources provided Bible study DVDs and workbooks at no cost so that the women could begin reaching out to their communities and leaders could be raised up in Native American churches.

“Many churches on the reservation would not have the funds to provide all of the materials to their ladies,” said Deidra Hodges, one 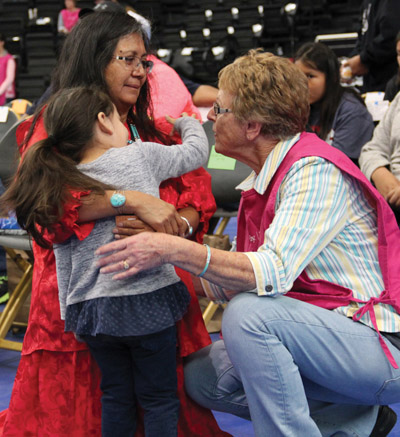 of the coordinators. “Now, not only are churches growing their women’s ministries, but many new Bible studies are popping up all over Arizona and New Mexico, some reaching 15-plus people each week.”

The day before the Oct. 6 Living Proof Live conference in Chinle, more than 100 women participated in Equip 2 Arise leadership training, held at Many Farms Church. Leaders from LifeWay teamed up with women from the Native American community and co-taught the sessions. Breakouts included such topics as discipleship/mentoring, youth ministry, and crisis counseling.

“For a gospel movement to sweep through the reservation land, it will be led by Native people. This is why the leadership conference was so important,” said Hodges, who serves along with her husband, Josh, at Every Tribe & Nation Baptist Church in Mesa.

“LifeWay brought their ladies to help lead alongside native women already leading in their churches,” Hodges said. “For many, this was their first time to attend something like this.” 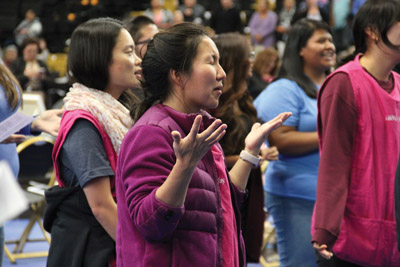 The day-long Living Proof Live conference, held at Wildcat Den in Chinle, drew people from more than 30 tribes from Oklahoma, New Mexico and throughout Arizona. A group from southern Arizona arrived by bus, which was provided by the Arizona Southern Baptist Convention.

Moore spoke throughout the day, and worship was led by Travis Cottrell.

Moore told the crowd that God’s call to us is as real and relevant as when Jesus called the disciples. Speaking from John 1, she related the story of Nathaniel, who questioned whether Jesus was who his friends had claimed. Nathaniel asked, “Can anything good come out of Nazareth?”

Moore explained, “Jesus is telling you, ‘Anywhere I go into, something good comes out of.’” 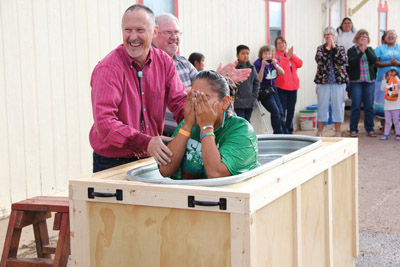 Following the conference, seven people who had responded to the invitation during the service were baptized at Memorial Baptist Church in Chinle. Memorial Pastor Greg Scott and Jon Hoyt, pastor of White Mountain Apache Baptist Church in Whiteriver and director of missions for Fourcorners Association, conducted the baptisms.

Paula Hoyt, women’s ministry coordinator for Fourcorners Association, reflected on the efforts of those involved in bringing the gospel to the reservation.

“Our hearts are full and our minds are full,” she said. “We don’t know where this will lead, but we don’t want to do things on our own. I am anticipating what can happen in the future. We know that the Lord is not done.”