Behind the bars, a mission to share God’s love with the incarcerated 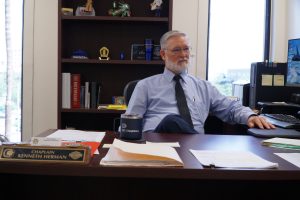 Ken Herman, a member of Avondale Baptist Church, is director of chaplain and volunteer services for the Arizona Department of Corrections, Rehabilitation & Reentry (ADCRR).

Correctional chaplains extend the love of God in an environment of loss and despair. They offer hope and healing to those hidden away from family, friends and society as they minister to the incarcerated from minimum security to death row.

Chaplain Kenneth (Ken) Herman, a member of Avondale Baptist Church and a doctoral candidate at Gateway Seminary, is one of those chaplains. He works both as a chaplain and pastoral activities administrator for the Arizona Department of Corrections, Rehabilitation & Reentry (ADCRR), where he serves as director of chaplain and volunteer services.

Herman oversees all religious programming in ADCRR’s prisons, where more than 40 religions are represented in a population of more than 35,000 inmates.

“Whether working with the incarcerated or staff,” Herman says, “we provide pastoral counseling. Everything we do has a spiritual focus. We address biblical, marital, personal relations issues and spiritual development.”

In addition, chaplains assist prisoners in transition by connecting them to churches and appropriate ministries for spiritual direction upon release.

From a Christian foundation, chaplains work to develop spiritual growth, with emphasis on improving an inmate’s behavior. Treating everyone in a loving, caring manner is their witness.

“My desire is that a non-Christian will say, ‘Why are you treating me this way? You know I am not this faith,’” Herman says. “Then, we can say, ‘This is what God says …’”

Those conversations open opportunities to share. Even though chaplains work with different faith groups and with individuals who have no faith, they still reflect Christ through actions and behaviors. Sometimes that opens doors, sometimes it doesn’t.

“Unit chaplains — those who are actually on the yard — have the greater opportunity of longer exposure with the incarcerated to develop that kind of relationship,” Herman says.

Chaplains also bring comfort through grief support and crisis intervention, regardless of an inmate’s faith group. They arrange for incarcerated individuals to communicate with loved ones if a family member dies, is suffering in the hospital or potentially on their death bed.

Herman and at least three other chaplains at ADCRR are endorsed by the North American Mission Board (NAMB), which allows a chaplain to serve within the prison system. These chaplains are part of Southern Baptists’ ministry — the same as church planters and missionaries — and are included in NAMB’s prayer calendar.

Herman did not plan on becoming a chaplain when he retired from the U.S. Air Force after 20 years. But he knows it was God’s plan all along.

After years of training military personnel, teaching the Bible and ministering to men at Set Free Ministries in Phoenix, he says, “God put me here for a reason: to help chaplains be better at who they already are.”

As churches give through the Cooperative Program, they have a part in the work of NAMB-endorsed chaplains.