The 236 baptisms by Calvary, Lake Havasu City, and its church plant in Parker during 2020 are more than just a record for the church. The number represents 236 people whose lives were changed by their faith in Christ. These are some of their stories. (Stories by Karen Willoughby

— Bianca Viloria: Climbing out of a deep hole

— 4th-grade class at Calvary Christian Academy: Why not?

— The Schlott family: Leading the next generations

Bianca Viloria: Climbing out of a deep hole 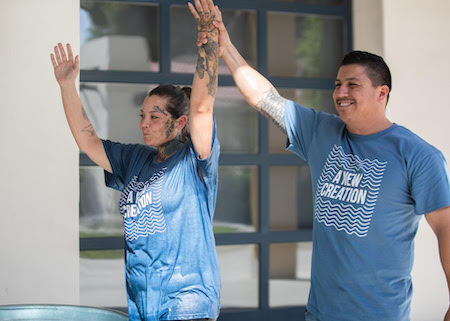 Bianca Viloria, 36, was ready to change. She had been ready for a long time. Even went to a church where “They hurt me,” she says.

She didn’t feel accepted. Small wonder. She was tattooed head to toe, her hair dyed unusual colors, and she was addicted to illegal substances.

But when a friend’s mother invited her to a free chicken dinner at her church one Sunday, Viloria went.

“For the food,” Viloria says.

She got a good meal, but also a life-cleansing bath in Christian kindness.

“The acceptance I received at Calvary [Baptist Church in Parker] was like nothing I’d ever experienced,” Viloria says. “People in masks were smiling at me with their eyes, men offered fist-bumps and the women were so inviting. I couldn’t believe it!”

She returned the next Sunday to Calvary Parker, and Pastor Ruben Magdaleno announced there was going to be a baptism. After researching what baptism was, Viloria remembered she had made a profession of faith in Jesus in 2012 and decided to show her obedience to Jesus by joining with those being baptized.

After stepping out of the portable horse trough being used as a baptistry, she stood dripping wet in front of those gathered and announced, “I want to lead the biggest women’s ministry in La Paz County,” Viloria says. “Pastor Ruben heard me. That was the first time my desires had ever been acknowledged.”

Born to drug addicts, Viloria was 5 when she was adopted. That same year, her new dad died, she began being sexually abused, and her mother became forevermore emotionally unavailable.

In time, Viloria found herself as a stripper in Las Vegas and a sex object. She turned to self-harm and contemplated suicide.

Finally, in 2012, despite no background in Christianity, she says, “I cried out, ‘God, there has to be something else.’ It was desperation that made me seek God.”

Her profession of faith came at a local church, but then she moved from Vegas to Phoenix.

“I felt like life was better, and I could do it on my own,” Viloria says. “And then everything got worse.”

Viloria escaped to Parker, where she had spent summers as a child.

“Finally, I was stable,” she says, “but I wanted to do things my way and thought my addiction would get me through. Self-medicating was my higher power.”

Then came the church that didn’t accept her, followed by Calvary, where she was baptized on Oct. 25.

Once she was acknowledged as wanting to have a ministry role at Calvary Parker, she knew there was first something she had to do.

“I knew I needed to let go of my safety net,” Viloria says. “My faith in God was bigger than anything else. I didn’t need marijuana anymore.”

She quit illegal substances cold turkey, as well as the antidepressants she was addicted to.

“It took me a month after my baptism to surrender spiritually, with all my heart and mind,” Viloria says. “I came to realize, if God is going to do what He wants to do through me, I need to surrender all of me. I was ready to surrender. I was done doing it by myself.”

Today Viloria cohosts a women’s Bible study through Calvary Parker. They are studying being transformed based on Romans 12:2.

“I want to encourage others to not be afraid to change,” Viloria says. “It’s a daily commitment to be in a relationship with God. God changes your life in ways nothing materialistic or any other person can.”

“I don’t want people to think I’m some kind of holy person. I’m not. I need God just as much as anybody,” says 30-something Travis Johnson,* a repairman. “A person’s life that looks so perfect, isn’t, without God.”

He thought about it for a long time, he said, before presenting himself for baptism last summer at Calvary Baptist Church in Lake Havasu City.

Though he had sporadically attended church as a child, “It wasn’t until the last few years that [attending church] became a priority,” Johnson says.

“When you go to church and read the Word of God and you know God, He challenges you and makes you think, ‘Am I doing everything I can to please God?’”

By all accounts, Johnson has a good life. He says he had chosen the right wife, keeps himself physically fit, has a good job and works to maintain his reputation as a trustworthy man of integrity.

“The Bible says to store up My commands and practice My word,” Johnson says. “I feel if you want to be more like Jesus, you have to work at it.”

Every person is a sinner, Johnson says, including himself.

“I don’t preach to anyone,” he says. “I tell people to read the Bible. I went through this with my dad. I told him, ‘You can believe what you want, but the Word of God is in the Bible. There is no made-up truth in it.

“So, as an outward declaration of following Jesus in my life, I signed up to be baptized,” Johnson says. “It was on my mind and my heart to do so. God led me to feel that way. It wasn’t peer pressure; I did it because I wanted to.”

4th-grade class at Calvary Christian Academy: Why not? 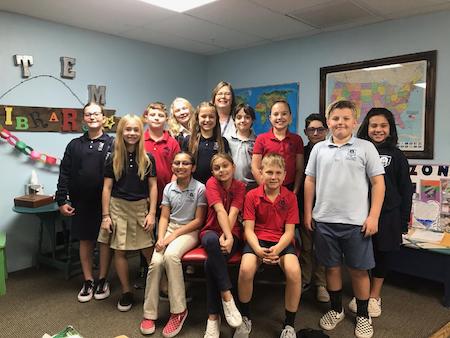 During the second week of school last fall, the 4th-grade class at Calvary Christian Academy learned from their teacher, Dianne Merrifield, about how biblical prophecies foretold Jesus.

“They all wanted to ask Jesus into their hearts,” Merrifield says.

Baptism was the subject two weeks later, during the weekly online chapel time the students watch in their classrooms.

“They all said, ‘Why can’t we be baptized? We invited Jesus into our hearts,’” Merrifield says. “I talked with our principal and the pastor and said the students would like to do it as a class, because most became Christians as a class.”

A baptism just for the class, and their family members to watch, took place Sept. 30 in Lake Havasu. Thirteen of the 15 students were baptized, as was Merrifield, who grew up in a Methodist home but had been attending Calvary Baptist Church in Lake Havasu City for six years.

“When I realized they were getting baptized to show their faith, I thought what better time for me to do the same,” Merrifield says. “It was an encouragement to them and important to me as well.”

She has a special bond with the class.

“I’ve seen more change in this class of 4th-graders than any previous class,” Merrifield says, who has been in Christian education since 1985. “They are a really special group of kiddos. I think they’re going to be world-changers one day.”

Zayah Loya was one of the 4th graders who made a profession of faith in Jesus and was baptized.

“I love God and want to give my life to Him,” Zayah says. “He gives us so many stories to talk about to other people. I love God so much,” the 9-year-old repeated. “I want people to see I trust God, and I want God to know that I trust Him.”

Tom and Loretta Brown started going together when she was 13. They’d been married 63 years when she died.

“They’re good to me,” Brown says. “They have a chair for me and the phone right by my ear. It’s therapy for me. I feel better when I’m doing something.”

Brown made a profession of faith in Jesus soon after he got out of the Navy in 1955. He was baptized at a Southern Baptist church in Downey, California, and both he and Loretta started serving.

“My first job was as a Sunday School teacher [for a class] that had three pastors sitting in on it,” Brown says.

He studied sign language at night for 10 years and used his skill in church and in the community, all while rearing three children along with fostering a dozen or so children for 11 years, then finally adopting a boy who had been with them since he was 18 months old.

“I pray and read my Bible every day, and I attend church on Sundays,” he says.

He’s a member of Calvary Baptist Church in Lake Havasu City, which each midsummer has a baptism in the lake.

“I’d been thinking about it, but didn’t tell anybody,” he says.

Brown saw it as an opportunity to reaffirm his commitment to God. He showed up to the baptismal site in his swimming trunks.

“It wasn’t a spur of the moment thing,” Brown says. “I’d been feeling I needed to be rededicating my life.”

He was one of 45 people baptized that day.

“I think it was the best thing I ever did,” he says. “I just feel better.”

The Schlott family: Leading the next generations 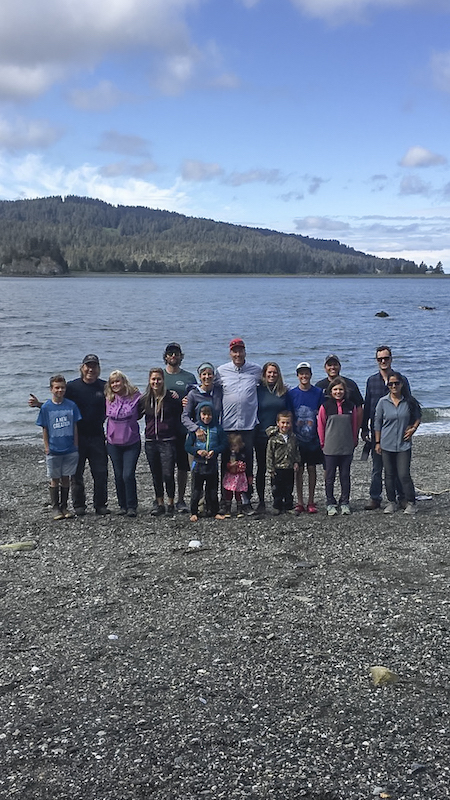 Al and Shelly Schlott, who attended Calvary Baptist Church in Lake Havasu City for about six years, returned last year to their home in Seldovia, Alaska, a small coastal town near Homer.

Before the pandemic, their daughters and their families (who had attended Calvary when visiting their parents) watched Calvary’s messages on the church’s website until, in the wake of COVID-19, the church started streaming its services on Facebook.

After the families, living in three locations, watched the service Easter Sunday, they called their grandfather and said, ‘We want to be baptized,’ Shelly Schlott says.

The youngsters were inspired when they saw all the people being baptized at Calvary, Shelly says.

On July 12, 19 people from the Schlott family walked a mile through the Alaskan woods to the beach on Kachemak Bay, which leads to the Pacific Ocean, for the baptism of Ben, 12; Grace, 10; Jake, 7; and Nathan, 5.

“Al’s not a preacher, but they knew their grandpa was following Jesus, and they looked up to him,” Shelly says.

Al questioned his grandkids beforehand to make sure they had made a profession of faith in Jesus and were ready to be baptized, she says.

A few months after the baptism, he heard one of his grandsons was being a little argumentative with his parents, so Al called him.

“I asked him to read the Bible with me over the phone, and he agreed,” Al says. “It went very well, and I said, ‘I’ll call you tomorrow.’”

Soon, four others joined in on a Bible conference call.

“Now there are six of us, 6 p.m. seven days a week,” Al says. “The calls involve the youngsters reading the Bible and discussing it with their grandpa.”