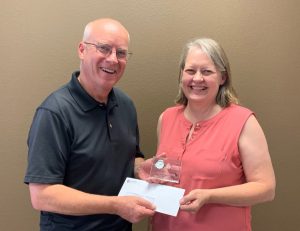 De Jesus, who completed level one of Clinical Pastoral Education at St. Joseph’s Hospital and Medical Center in the spring, resigned to continue formal chaplaincy training and ministry.

She joined the AZSBC staff in 1991 as editorial assistant of the Baptist Beacon, Arizona Southern Baptists’ official news publication at that time. She later became assistant editor, before being named director of public relations in 1995. She resigned in 2000 after the birth of her second child.

De Jesus started back as a contract worker with the AZSBC in 2006 to work on E-quip, an online ministry training site created by the Canadian National Baptist Convention and offered to state Baptist conventions. Later, she rejoined the AZSBC staff full-time in information services, maintaining the website, working with video, providing tech support and serving as the office coordinator for Arizona Southern Baptist Disaster Relief.

During her time on the AZSBC staff, she earned a Doctor of Ministry degree from Gateway Seminary.

“We are deeply grateful for Sandy and her 22 years of service to our convention!” said David Johnson, AZSBC executive director. “Over the years, she has worked on everything from Portraits magazine to our website to Disaster Relief. We wish her the best as she begins a new chapter in her life and ministry in chaplaincy.”

De Jesus was honored during a staff luncheon on June 22. 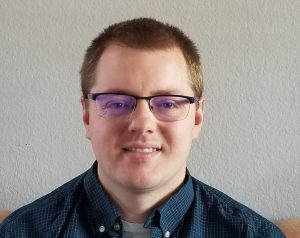 Dressler is an ASU graduate with a degree in software engineering. His primary focus was web and mobile application development, with a secondary focus in religious studies.

College was a pivotal time in Dressler’s life.

During that time, he became a Christian, “thanks to the witness of some friends at work who spent nine months answering my questions about Christianity and the Bible,” he said. Through friends at church, he got plugged into Christian Challenge and served in that ministry throughout college.

As a senior, he answered God’s call to vocational ministry and began serving as a Christian Challenge campus missionary after graduation in 2017.

“We are excited to welcome Eric Dressler to our staff as our new media tech director!” Johnson said. “Eric brings the same sense of call and commitment he demonstrated as a campus missionary with Christian Challenge to this new role with the AZSBC. We look forward to Eric helping us as we move into a new era of online and video communication.”

Dressler is married to Lydia, and they are members of First Baptist Church of Chandler. 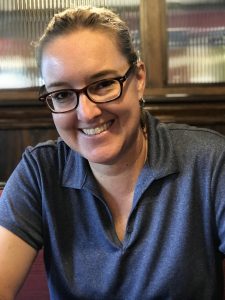 Newsted first joined the Christian Challenge (then called Baptist Collegiate Ministries) staff at the University of Arizona as a part-time secretary in 1995, when she was a college student. During more than 22 years with Christian Challenge, she also served as associate director, director and then campus missionary. For 19 months during 2008-2009, she stepped away to serve as the collegiate strategist with Second Mile Church in Tucson.

“My season at Christian Challenge was such a joy!” Newsted said. “I loved the students, the staff and what God allowed me to do for Him. [I’m] so grateful for the years of serving in that ministry.”

“Julie has a long history of sharing the gospel on campus at U of A and has been faithful in discipling scores of collegiate women through her years of service to Arizona Southern Baptists,” said Marc Hill, Christian Challenge state director.

Newsted is carrying forward her call of making disciples to a new ministry.

“I’m excited to continue in a new direction of making disciples who make disciples,” she said. “I am seeking the Lord of how I might go about that task, but it will most likely include one-to-one disciple-making, evangelistic Bible studies and speaking/teaching at women’s events.”

Johnson said, “We thank God for Julie and her faithful leadership in the Christian Challenge ministry at the University of Arizona over the years. Her work with students has made an impact in places around the world where they now serve in every walk of life. We are sad to lose her presence with the ministry but are excited about what God has in store for her in expanding her ministry further in the future.”