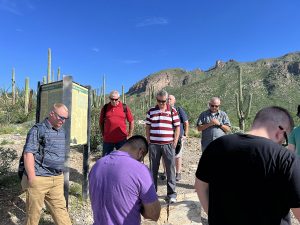 Brian Hook, pastor of Aspire Church in Tucson, capitalized on a speaking opportunity at a missions event in Oxford, Alabama, last April, to springboard plans for a Vision Tour in Tucson four months later.

The Vision Tour, hosted by Aspire Church, took place on August 15-16 in Tucson. The purpose was to bring together pastors from Arizona and Alabama to pray over the metro Tucson area, engage church planters and dream about future partnerships together.

Why Reach out in Tucson?

Tucson is one of the biggest mission fields in the southwest United States.

“Tucson metro hosts a population of 1.3 million people and [is] one of the top postmodern cities in America,” said Monty Patton, NAMB Send Network Arizona director. “We have two major population centers and two major universities in Arizona. We must reach Tucson if we are going to reach our state.”

Tucson also has a group of churches that meets regularly and has a huge heart for the city. The Tucson Church Planting Network is a group of mission-minded churches with the heart of multiplying disciples. Brian Hook took the lead to organize the event in an area that George Barna research documents as one of the most godless cities in America. 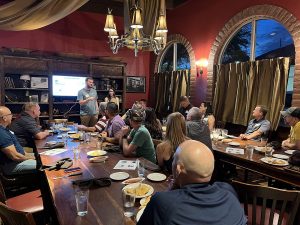 The Layout of the Event

One of the main goals for event organizers was to hear how church leaders could join the work of God in church planting, and possibly commit to partnering with a church planter.

The tour included focusing on the University of Arizona, where planter Chris Cummings gave a tour during student move-in week. Cummings shared his passion for the university and how you can not only reach a city by planting a church at the university but also impact nations.

The pastors then went to the Cummingses’ new house located one mile from campus. “This house is where we prayed and where they will host small groups before their launch in late 2023,” said Hook. “The pastors even got to demo some of the walls that were being knocked down! It was truly hands on.”

The tour stopped for lunch at 22nd Street Baptist Church. During lunch Nick Hundley, former University of Arizona and major league baseball player, shared why partnering with Brian Hook and Aspire was such a big blessing to him and his wife, Amy.

Hundley’s story challenged the pastors to create disciple-making churches that are focused on the city and not just an event on Sunday.
“We must see more churches planted that are more like aircraft carriers than cruise ships,” Hundley said.

In addition, Marcos Campos shared his vision of Hispanic church planting that he is organizing throughout the Arizona. His insights helped cast a vision for reaching a rapidly growing Hispanic population that is about half of the city of Tucson. 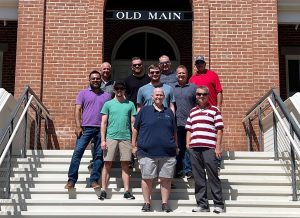 Highlights of the Vision Tour

“One of the main highlights [of the Vision Tour] for me was the receptivity of pastors both from Alabama and Tucson to join God in church planting,” Hook said. “This is so inspirational to come together and to pray together for our city, trusting God for the outcome.

“Some of the God stories shared by the planters and [stories of] their faith journeys are so inspiring,” he continued. “One such story was the Cummings family. Kristin Cummings, wife of Chris, is a medical physician, and just received a job at Banner Hospital. Their new home sale closed during the Vision Tour and is literally one mile from campus and Banner Hospital. This is miraculous considering how expensive the housing market is and the location.”

A spirit of faith, unity and anticipation is increasing as church leaders supporting the event look to the next chapter of church planting in Tucson. Church leaders from Alabama are standing behind the planters in Tucson.

With this strong leadership, big vision and the commitment to reach the city, the future looks bright.