Sarah and Emma tour and make friends in Central Asia.

For two years, sisters Emma* and Sarah*, members of Northern Hills Community Church in Phoenix and students at a local college, anticipated spending a semester working with an International Mission Board team in Central Asia. The delays that prevented these two sisters from starting their assignment began before anyone had ever heard of COVID-19.

Finally, in August 2021, Emma and Sarah were off on their assignment in Central Asia with the IMB’s Hands On program.

The Hands On program is a short-term volunteer assignment for students and young adults to work with an international missionary mentor for four to 12 months. For this volunteer assignment, participants must cover their costs, which for a semester is around $4,000. These costs include airfare, meals, lodging and insurance.

Before Emma and Sarah had planned to be a part of the Hands On program, they connected with a local missionary. They met this missionary through a relationship their pastor’s wife had with an IMB team in the city where they would ultimately begin their assignment.

The IMB team that Emma and Sarah would join began to craft a strategic role for them to use their skills as photographers. As college-aged sisters taking photos while touring Central Asia, they would be able help the long-term IMB team get into strategic locations the team might not otherwise be able to reach.

“Our lives are about ministry,” Emma said. “We only take a couple of college courses each semester to leave room for ministry at our church, school or wherever God is leading.”

Their ministry-focused lives made saying yes to the opportunity to be Hands On missionaries uncomplicated. Being away from their studies for a semester fit into the rhythm of their lives. This rhythm allowed them to use their talents, gifts and abilities as opportunities to minister and serve came up. 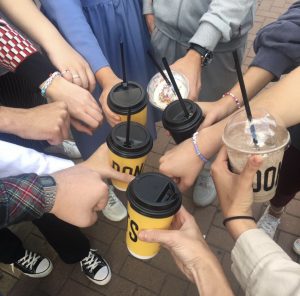 Local Christian friends share one last tea with Emma and Sarah before the IMB workers had to leave their city.

The five months the sisters served in Central Asia were not the dreamy international mission life they had envisioned. Not too long into their five-month term of service, they were forced to leave the city and team they had come to serve alongside and move to a different country and team.

Even though they tried to go in with no expectations, they found some aspects of ministry were the same no matter the geographic location. Even with the challenges of language barriers, culture differences and people being people, both sisters could see the Holy Spirit at work drawing people to the Father through the Son.

“The darkness comes from the same place, but the Holy Spirit is at work bringing light to dark places,” Sarah said.

While in their first location, Sarah and Emma worked primarily with local churches. In their second location, they had more opportunity to interact with people who had yet to hear the Gospel.

Through both experiences, some of the most valuable outcomes were the quick but strong relationships that were formed.

“We arrived back home two days before Christmas.” Emma said. “As we sang ‘Joy to the World’ with our Arizona church family, the words took on a whole new meaning.”

While Sarah and Emma were sent out by Northern Hills Community Church, they were not sent without support. They have been a part of Northern Hills from the womb, as family has been members since before Sarah and Emma were born. Not only did the the church provide their entire financial support, but church members were also an active source of emotional support during the rapid and tense transition out of one country into the next.

“We may have been the ones overseas,” Sarah said, “but we were consistently supported by our local church.”