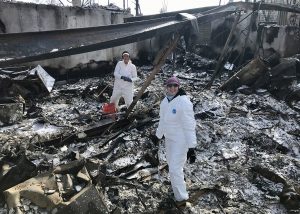 Working in the rubble of a house burned in the Marshall Fire in Colorado, Arizona Southern Baptist Disaster Relief volunteers Sue Cook (right) and Norma Turner look for items they can salvage for the homeowners.

When all seems lost in the ashes of a home burned in a wildfire, Arizona Southern Baptist Disaster Relief workers bring hope. Seven volunteers are currently in Colorado, sifting through the ashes from the Marshall Fire that sparked in late December.

The fire was the most destructive fire in Colorado’s history in terms of property loss and damage, according to the Colorado Sun. A total of 1,084 homes – mainly in Louisville and Superior — were destroyed, and another 149 homes were damaged.

The fire, which started due to dry conditions mixed with severe wind, spread so rapidly that residents had to evacuate without taking much more than the clothing on their backs.

A disaster assistance center was set up at Reclamation Church in Boulder. More than 400 residents asked for help sifting through the remains of their homes, hoping to recover something of their possessions.

The seven Arizona Disaster Relief volunteers are working on sifting through ash in Louisville, the area that sustained the most damage. The Arizona crew will remain serving in Colorado through Feb. 3. 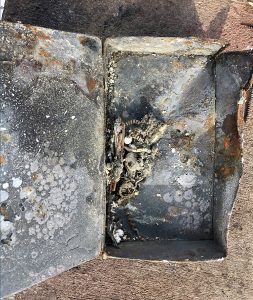 The remains of a jewelry box found by Sue Cook brought tears to the homeowner’s eyes.

“Right away, I saw a rectangular metal object sitting on top of the ashes in the basement,” she said. “At first, I thought it might be part of the home’s structure, but it was a metal box.”

After carefully opening the box, Cook realized she was holding the remains of a jewelry box. Upon arrival at the site, the homeowner teared up and was amazed and overcome at the find, as it was sentimental to her, Cook said.

Southern Baptist Disaster Relief exists to provide help, hope and healing to those affected by natural disasters. The Arizona team helped provide a ray of hope that not all was lost in the fire, allowing healing to begin with the recovery of memories and treasure.

The ultimate goal of Southern Baptist Disaster Relief teams around the nation is to show that Christ’s love is what brings lasting help, hope and healing.