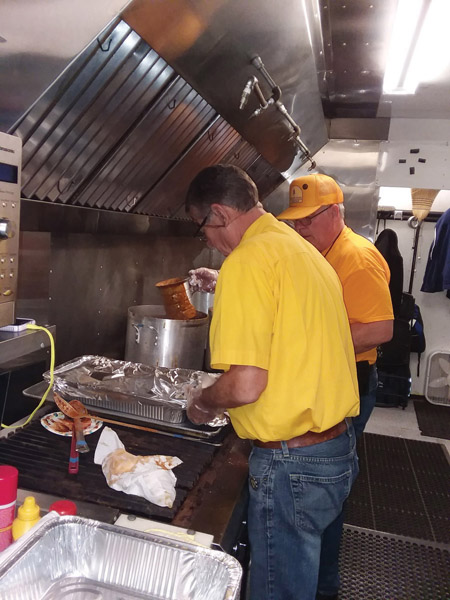 Arizona Southern Baptist Disaster Relief teams have been linking arms with other relief agencies and nonprofits to serve in various ways recently.

During the Christmas season, Arizona Southern Baptist Disaster Relief sent three teams on three separate trips to assist a California refugee shelter with the preparation of meals. The teams prepared 6,650 meals Dec. 11-Jan. 5, with a break just for Christmas day.

The San Diego refugee shelter, located in a Catholic church facility and run by a Jewish family services organization, had to close its kitchen temporarily while repairs were made to the stove hood by order of the fire marshal.

According to Kirchner, the asylum-seeking refugees who came through the center had all been processed and released for transport by U.S. Immigration and Customs Enforcement (ICE). These refugees had been allowed to cross the border because they already had sponsors awaiting them somewhere in the United States.

“When the refugees came to the center, ICE had already set court dates for them in the cities where their sponsors were located,” said Kirchner. “The adults wore ankle monitors to keep track of their locations, and the center was tasked with securing travel arrangements and getting them on their way to their sponsors.” According to Kirchner, most of the people who came through the facility were there for 24 hours or less.

Because the refugees did not speak English, the 10 disaster relief workers who served on the three teams did not have the opportunity to share the gospel the way they often do when ministering in crisis situations. But that doesn’t mean their witness didn’t make an impact.

“More than once, someone told us that there was something different about how we went about things,” Kirchner said. “The lesson for us was that you don’t always get an opportunity to witness for the Lord through words. But we felt we still made an impact for Him.”

The Arizona Disaster Relief team took their event trailer to California and prepared the food for three meals a day while bilingual volunteers and state employees handled most of the serving. However, there were times when the Disaster Relief team did have opportunity to serve the refugees personally.

Twenty Arizona Disaster Relief chaplains were among the 126 registrants. Red Cross, police, fire, prison, hospital and hospice chaplains also registered, along with several emergency dispatchers, detectives and firefighters. Each of the courses required two or more days to complete. Participants received certificates from the International Critical Incident Stress Foundation at the completion of each course.

Plans are underway for similar training in 2020.